Home Chemistry Deduction of the Gas Laws from the Kinetic Equation 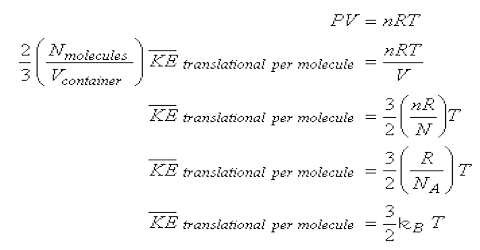 This is the kinetic equation for gases. Although the above deduction has been made for a cubical vessel the equation is valid for a vessel of any shape as the vessel can be divided into a large number of small cubes for each of which this equation is valid.

PV = constant (at constant T) which is Boyle’s law. In other words according to Boyle’s law volume is inversely proportional to pressure when the temperature and the number of molecules are constant.

Charles’ or Gay-Lussac’s law: The total kinetic energy of the molecules is proportional to the absolute temperature. i.e K.E. = const x T (hence from equation 2)

Where n1 is the number of molecules, m1, is the mass of each molecule and c1 is the r.m.s. velocity. Similarly, for the second gas;

Where n2, m2, and c2 have the same significance as for the first gas. Since P, V and T of the two gases are the same, according to equation (1)

At the same temperature, the Kinetic Energy of the molecules of both the gases are the same; that is,

That is, the number of molecules in equal volumes of the two gases under the same conditions of T and P is the same. This means that at an unchanged temperature and pressure conditions, the molar mass of every gas is directly proportional to its density. This implies that in unchanged conditions of temperature and pressure the volume of any gas is directly proportional to the number of molecules of that gas. This is Avogadro’s hypothesis or Avogadro’s law.

Method of Limiting Density in Density of Gases