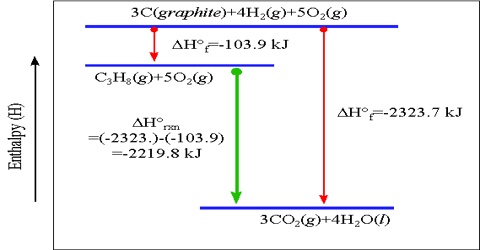 If heat is evolved the reaction is said to be exothermic and when heat is absorbed the reaction is an endothermic one. Heat of reaction may also be defined as the difference in enthalpy or heat content, ∆H, between the products and the reactants. It is a thermodynamic unit of measurement useful for calculating the amount of energy per mole either released or produced in a reaction. The amount of heat change is expressed in kilojoule (KJ). The following examples will, perhaps, clarify the definition;

Lavoisier and Laplace’s law of Thermochemistry