Home Chemistry Total Entropy Change of a System and its Surroundings 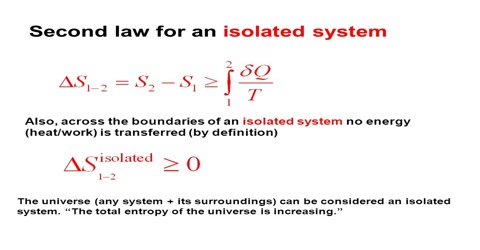 Total entropy change of a system and its surroundings

A system is that part which is under investigation. The surroundings constitute all other parts which might interact with the system. In most cases, the surroundings consist of heat reservoirs that can add heat to or take out heat from the system or of a mechanical device which does work on or accept work from a system.

Consider now, an irreversible process in which the system absorbs an amount dqirrev of heat and on from state A to state B. Entropy being a state function, the gain in entropy of the system is given by SB – SA. This gain in entropy, of course, is calculated from the relation:

Gain in entropy of the system = SB – SA

According to the relation, the value of the integral is always less than SB – SA, so that the net change in entropy is a positive quantity; that is, as a result of the process there is a gain in entropy of the system and the surroundings taken together. Hence, if any part of a process is irreversible there is an increase in entropy when the system and its surroundings are considered together. Natural processes are spontaneous and therefore, irreversible. It follows, then, that natural processes are accompanied by an increase in entropy and the sum total of entropy in the universe is increasing. This deduction led Clausius to make his famous statement of the laws of thermodynamics:

This conclusion from the second law of thermodynamics has profound philosophical implications. Considering the system and the surrounding together we can, in summary, write:

∆S = 0 for a reversible process

and ∆S > for a natural process