When a steady current flows in one coil as in the left illustration, a magnetic field is produced in the other coil. Suppose, P and S are two coils placed close to each other (Figure). P is connected to a battery through a key K. S is connected to a galvanometer G. On pressing K, current in P starts increasing from zero to a maximum value. 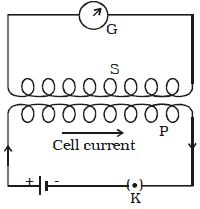 Explain Induced emf and Current in terms of Electromagnetic Induction