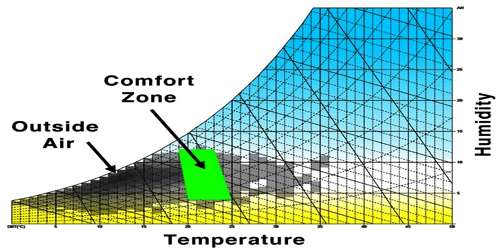 Some real phenomena relating hygrometry which influence our life

Effect of relative humidity on the feeling of comfort and uneasiness

The main factor which controls the sensation of comfort or uneasiness is the relative humidity of the air. In general, when the moisture content of air is low, the perspiration produced from our body evaporates rapidly. This quick evaporation cools down the body and produces the pleasant sensation. On the other hand, when the relative humidity of air is high the evaporation of perspiration from the body becomes slow, so we feel discomfort.

Chittagong is located near the sea, whereas Dinajpur is far away from the sea. The air in Chittagong in a day at particular temperature contains more water vapour than at Dinajpur at the same temperature. For this reason, perspiration evaporates more quickly at Dinajpur and hence one feels comfortable there. On the other hand, perspiration evaporates less rapidly in Chittagong, so one feels discomfort there.

In winter atmospheric air virtually does not contain water vapour Atmosphere Absorbs water from the softer part of the uncovered portion of the body. As a result lip and skin are very prone to get parched in winter. Glycerin prevents the atmosphere from absorbing water from the lips and skin which prevents parching.

Although the temperature in winter season is less than that in rainy season, the atmosphere is less humid. Air contains a large amount of water vapour in rainy season and the relative humidity is very high which hinders evaporation. For this reason, wet clothes dry more quickly in winter than in rainy season.

Why are dews found to form in the cloudless night than in cloudy night?

We know, water always evaporates from the rivers, canals, seas, lakes etc. and forms water vapours which mix with the atmosphere. During day-time, air adjacent to the ground becomes warm due to sun rays and remains unsaturated by water vapour. During cloudless night earth-surface becomes cooler by radiation and ultimately attains a temperature when the air becomes saturated with water vapour. At this condition, water vapour forms dews by condensation. But on a cloudy night earth’s surface does not become cooled by radiation heat. As the cloud is a bad conductor of heat so heat cannot transfer from the ground by radiation. So, earth’s surface does not cool and dews do not form.

Meaning of the Statement- Relative Humidity of air is 60 percent