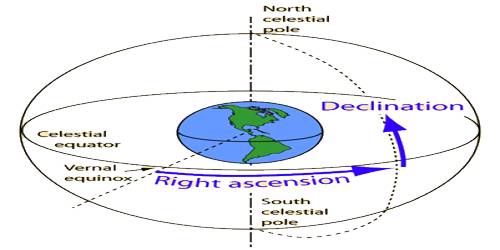 Declination is the angle on the horizontal plane between magnetic north and true north. The earth’s magnetic poles and geographic poles do not coincide. Consequently, the magnetic meridian plane and geographic meridian plane at a place may not coincide. One meridian intersects the other meridian. As a result, an angle is created between them. This angle is called declination of the geomagnetism. 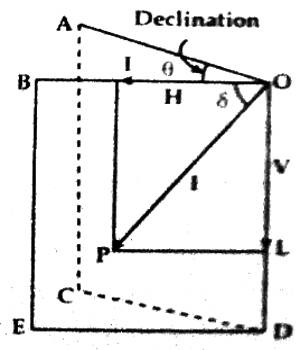 At Any place, if the north pole is in the east making an angle θ with the geographic axis, then declination at that place is θ0E or θ0 East and if it is θ0 West, then the declination is θ°W or θ° West.

Example: Suppose the declination of Newyork City is (1/2)0 East. This statement means that the axis of a freely moving magnet makes an angle (1/2)0 with the geographic meridian from the magnetic meridian and its north pole is in the East of the geographic axis.