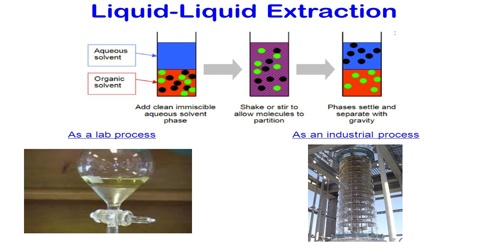 Solvent Extraction, also known as liquid-liquid extraction, is a method to separate compounds based on their relative solubility’s in two different immiscible liquids, usually water and an organic solvent. An important application of the distribution law is in the extraction of a solute from a solvent by another solvent. If the solubility of a solid in two mutually immiscible liquids are different then on shaking the solution of the solid in solvent I with the second solvent II, a considerable amount of the solid passes into the solvent II, depending on the relative solubility of the solute in the two liquids. If now solvent I is separated from solvent II a part of the solid, which has been extracted away from solvent may be recovered. A second part of the solute may be extracted from solvent I by shaking with a fresh portion of solvent II and separating. Continuation of this extraction process will eventually lead to almost complete removal of the solute from solvent I. This process of separation is known as solvent extraction. It is the partial removal of a substance from a solution or mixture by dissolving it in another, immiscible solvent in which it is more soluble. The method is particularly suitable for separation or purification of heat sensitive or high boiling organic compounds from aqueous solutions by an organic liquid. If separation from aqueous solution is desired the process of extraction is facilitated by the addition of soluble inorganic salts as the solubility of the organic compound in water is lowered by salts.