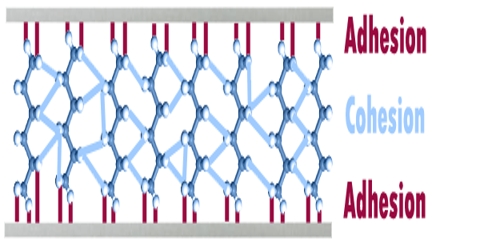 Attractive force operating between like molecules, as in a pure liquid, is termed the force of cohesion. The term adhesion is used if the attraction is between unlike molecules, namely, between water and a clean metal surface. When adhesion is relatively strong the water molecules will spread on the clean metal surface. This is known as wetting. The forces have decisive influence in choosing a correct detergent for cleaning purposes.

Cohesive forces are responsible for surface tension, the tendency of a liquid’s surface to resist rupture when placed under tension or stress.

Measurement of Elevation of Boiling Point

Kinetic Theory of the Distribution Law