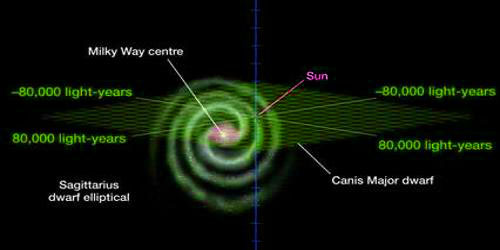 It appears that the motion of the planets around the sun is ultimately chaotic. Although the time frame of that chaos is very large. It means that with the passage of time probability of error in the forecast increases. After a particular time, elaborate forecast about the motion becomes almost impossible. In ancient time people had faith that earth is at the center of the universe. So, they were not astonished to know that all backward directions were the same. But from Copernicus description, our idea has become much clear. The earth belongs to one of the visible ten thousand billion nebulas as a typical planet and situated at the edge of the nebula and rotates around a star. The earth is so insignificantly small that it cannot claim a special permanency. For that reason, we need to consider that in any nebula in any direction the background is identical. It can be possible if the average density of the universe and the rate of expansion are everywhere identical if the density of the universe is more than a critical value, then gravitational attraction will stop the expansion and contraction will start in the universe. The universe will collapse in a giant contraction. Due to the giant explosion the universe started, this contraction will be similar to that. In large scale, the behavior of the universe is neither simple nor chaotic. So, the forecast can be made up to the near future.

Suppose 15 billion years back there was a big explosion and due to that, even today galaxies are running in all directions. And after that what will happen? Clearly, it can have two answers. One is that this running will continue eternally, another one is that due to the attraction of the matters of the universe this running will stop and then all the galaxies will move inward. Scientists call probability of running at eternity as open universe and probability of stopping of running away and moving inward is called a closed universe.

Out of these two probabilities which one will be applicable will depend on the total amount of matters in the universe. If the matters in the universe remain more than a critical value, then due to an attraction of these matters running outward will stop and then inward motion will set in. This critical value has been calculated as three atoms per cubic meter. But it is seen that the total mass in all galaxies of the universe is only 10 to 30% of this critical value. Some people think it is less than that. But many scientists believe that a matter in the universe is much more and if searching is done vigorously it will be possible one day that these matters will be found out. But some scientists say that there exists a third possibility which cannot be ignored at all. They believe that the expansion of the universe may stop one day but will not collapse from within. This hypothesis is called ‘ flat universe’. 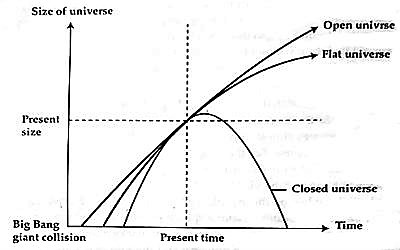 What will be the result of these three models have also been calculated by scientists. The calculation of the closed universe is quite simple. After becoming a white dwarf, then an expansion of the sun will stop after 30 billion years; thus everything will appear happening in the reverse direction as a video picture looks like when it moves in opposite direction i.e., all the galaxy groups will continue to come closer together. In this way, after 50 billion years a critical stage will come. Then all the galaxies will adhere to each other, and then one will jump into another. Creating enormous heat and giant illumination they will form superstars and super quasars. The sky of the night will glow brighter than the sun; temperature of the universe will increase like that of the stars. Before one hundred thousand years of giant collapse, innumerable black holes having intense heat and the extremely concentrated condensed matter will be formed. Finally, after 80 billion years a giant black hole will be formed due to the collapse of everything of the universe by an absolute explosion. The mass of that giant black hole will be equal to the mass of the universe. Since space-time was created with the creation of the universe. So if the universe disappears then time and space will also disappear and in that Universe what will exist is absolute zero.

Compared to this calculation of closed universe calculations of the flat universe and open universe, to some extent, are mysterious. According to both the models how the end will happen is difficult to say but may be considered that successively the universe will disappear. Further many billion of year’s galaxies will continue to create stars from their dust and gases. Life of stars like the sun is about 1010 years, but the small stars which glow flickeringly; they might live 10,000 times more (1010 years) than the sun. That means, after ten thousand billion years only small red giants will stay in the universe, if the sun does not disappear as vapor after becoming a red giant, then the whole sky will look from the earth extreme black. A dead body of the sun will transform into a black lump after successive cooling from the white dwarf, even then also possibly the burnt body of the earth will rotate around it.

To reach this stage the time taken by the nebula will be 1014 to 1017 years. A group of nebulas will form only one black hole. So, after 1027 years the whole universe and nebulas will be a sum of black holes. Between them, there will exist only giant vacuum where only some white dwarfs, neutron stars or black holes losing their ways might wander alone [Fig. B]. A black hole is not permanent; rather it radiates slightly and will disappear after many years. This radiation theory was discovered by the scientist S. W. Hawking of Cambridge University and it is known as Hawking radiation. A black hole has a mass of nebula black hole lives about 1065 years. Nebula black holes are many times larger and the largest of them will live 10100 years. Black holes will disappear and the nebulas that are present in the universe will also disappear. 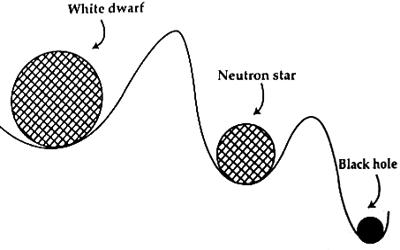 After 1000 million years light of red giants will also disappear in the sky, then nothing will be seen in the space. Then matters will remain in the dead bodies of innumerable stars. Those dead bodies are black holes, neutron stars, and black dwarf. Other planets, satellites, and lump that will exist they will not radiate, all energy will be exhausted. Gradually all protons of the universe will start decaying. Of course, according to scientists’ theory time for decay of protons will take above 1032 years. Then nothing will remain other than black holes. But will this black hole remain unchanged? One day they will also decay, but after how many years that calculation is beyond imagination, maybe after 1063 (i.e., sixty-three zeros after one) years. Up to that day, there will be the only vacuum in the universe.

Even if the unification theory is not correct, there is another reason for the decay of proton. If quantum theory is applied for gravitational force, then it is seen that life of a proton is between 1045 to 1050 years. This value has been estimated by the famous scientist S. W. Hawking. According to quantum theory vacuum is full of virtual particles and anti-particles. A proton bounded for a long time may be swallowed by a virtual tiny black hole and can convert it into a position. This is because that the black hole may be virtual but it enters into it proton will lose its characteristics. So, according to absolute unification theory, or gravitational law and quantum theory if a proton is not permanent then the fate of the universe will be different. That means, this universe will be destroyed. In the light of physics besides this discussion nothing can be said about the fate of the universe at present.