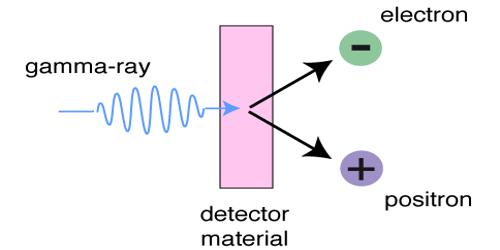 Gamma rays or radiation (symbol γ) is a type of high frequency and very small wavelengths electromagnetic wave (10-9 cm – 10-11 cm). This is produced by the interaction of sub-atomic particles like electron-positron annihilation process, supernova explosion, pion decay, radioactive decay, fusion, fission, inverse Compton diffraction etc. The frequency of gamma ray is normally above 10 Hz so its energy is above 100 KeV and wavelength is smaller than 10 picometer which is smaller than the size of the atom. French chemist and physicist Paul Villard in 1900, discovered gamma-ray while doing experiment with radium radiation. Earlier Earnest Rutherford discovered alpha and beta rays in 1899 and 1903. Rutherford gave the name of this radiation discovered by Villard as a gamma ray. 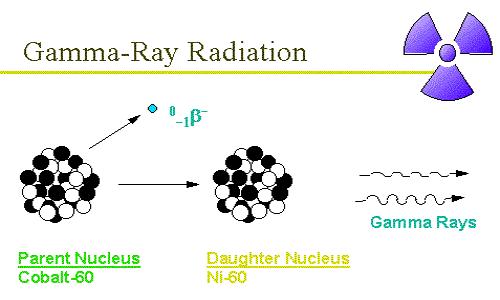 Fig: Radiation of γ-ray from the atomic nucleus

Gamma rays are emitted from the atomic nucleus. Natural source of gamma rays is potassium, thorium, and uranium. These elements are found in granite, stones, ashes, and clays of the volcanoes. Naturally, it is produced in the decay of radioisotopes and the interaction of cosmic rays with the atmosphere. Gamma-ray radiation can be identified through the gamma-ray telescope. Light natural source for example, from the striking of light gamma ray, can also be generated. Besides, a different process relating astrophysics, where high energy electrons are generated there also gamma rays can be produced. In this case, due to inverse Compton scattering and synchrotron radiation secondary gamma rays are radiated. More energetic gamma rays than that produced from radioactive ray radiation are obtained from the interaction between planets and stars. Here energy of gamma ray is 10 TeV. Again when the stars collapse which is called hypernovas then high energy gamma rays are produced. This is the principle of generation of gamma rays. The basic principle of the Gamma-ray Telescope used for the identification of gamma rays is as follows:

The mirror used for the identification and reflection of X-rays is not used in the gamma identification instruments. When these rays pass through the scintillation counter of the gamma-ray identification instrument, then a portion of its energy is transferred to the particles of the scintillation counter for which high energy charged particles are produced. As a result, photons are produced due to interaction within the crystal at the counter. By collecting this low energy photons through the detector of the gamma-ray telescope intensity of the incident gamma rays is determined.