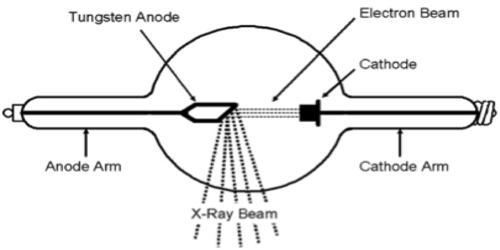 The difference between X-rays and ordinary light is their wavelengths. Wavelengths of X-ray are about 10-8 m -10-13 m, hence not visible. X-rays having high penetrating power while going through ionizing gases ionize it.

When high-speed electrons strike a metal, then a short wavelength and high penetrating power electromagnetic radiation are emitted. This radiation is X-rays. This is the principle of X-rays. That means when heavy elements are struck by high energy electrons, then by the agitation of the interior electrons of the atom this ray is produced. 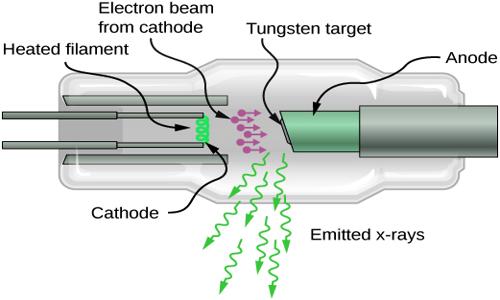 Fig: A sketch of an x-ray tube

Space around many mysterious and interesting matters of the universe like quasar, pulsar, black hole is not visible but their radio wave radiation viz. X-rays are very powerful. If in any dual star system there is a neutron star then from the other star matters drop into the neutron star. As a result, X-rays are found which is used in identifying neutron star. Telescope based on earth only allows entry of visible light and radio waves. Nowadays different space telescopes are sent to space. Those telescopes are taking photographs of different objects of the universe by visible light, X-rays and radio waves and are exposing to use the different fascinating and mysterious aspects of the universe.