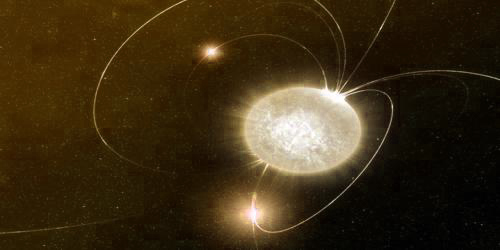 In this way, neutron gas is produced. Due to contraction when the density of the core reaches to 1019 kg/m3, then neutron degenerate state is created which refuses to pack tighter and halts the further collapse. In that case, neutrons behave like a solid wall. In this condition, neutrons resist further contraction that means neutron gas produces an outward pressure which balances the gravitational contraction and comes to a stable state. It is called Neutron star. Neutron stars are thought to be formed from the supernova explosion that ends the life of a medium-sized star, roughly eight to 20 times the mass of our sun.

In the figure, a neutron star has a mass more than 1.4 Mo has been shown from its center outward and densities of different portions with respect to the density of water. Although the mass of the neutron star is more than 14 Mo, its radius is only 16 km (radius of the sun is 700,000 km!!!). Scientists believe that the neutron stars spin rapidly and have a powerful magnetic field. Radio pulses are emitted from neutron stars at the precisely regular interval (ranging from 0.033 to 3.75 seconds). Hence they are called pulsars as well. Scientists recently announced the first detection of gravitational waves created by two neutron stars smashing into each other. 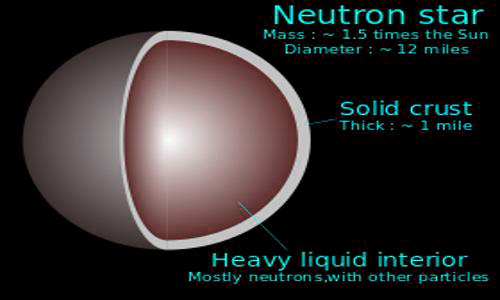