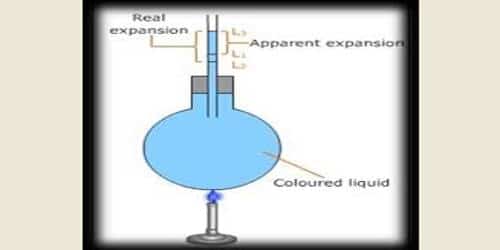 A glass bulb with a long graduated stem is filled with liquid up to the mark A. Now keeping an eye on the liquid column the bulb is heated and it is observed that the upper level of the liquid comes down from position A to position B. After that, it moves up from the graduated line B crossing the mark A and reaches to mark C.

The reason is that when the heat is applied the volume of the bulb increases at first. Due to this cause liquid comes down to B from A. Later on as soon as the liquid gets heated its volume starts to increase and reaches from B to C. It happens so as the expansion of liquid is more than the expansion of solid.

Apparently it appears to us that the liquid was at mark A and finally reaches to mark C. Therefore, CA is the apparent expansion. CB is the real expansion and AB indicates the expansion of the container.

From the figure it is observed that,

Therefore, in the case of liquids, we are concerned only with volume changes when they are heated. The real (or absolute) expansivity of a liquid is the fraction of its volume by which it expands per kelvin rise in temperature.

Pascal’s Law and Effect of Gravity