Home Physics Mystery of Creation of the Universe 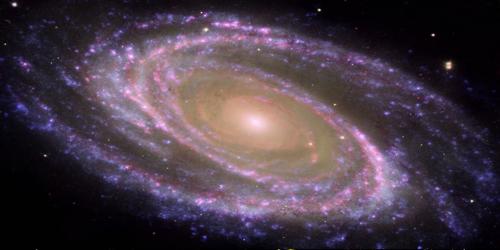 The mystery of Creation of the Universe

Since ancient times people started thinking about the creation of the universe. But most of these thinking would rotate around individual’s thinking. Individual’s opinion got importance. Besides, most of these thinking was based on fate and supernatural things. During the middle ages, it was a crime to think anything beyond the Bible, even if anybody thought differently he would have to face the crunch of the churches. Scientific thinking about the universe virtually started during the nineteenth century and at present, we have achieved a great success about this matter. In order to know the mystery of the universe theory of relativity, quantum physics, rotational dynamics, thermodynamics, plasma physics and solid state physics and above all astrophysics were needed to study. The science relating the creation of the universe and other related phenomena belongs to cosmology.

Cosmology as a branch of science originated after the discovery of Einstein’s theory of general theory of relativity in 1916. This theory teaches us that the universe is the demonstration of the space and time. Newton did not notice that within Newton’s Gravitational law the seed of the origin of the universe was hidden. The gravitational law says that within this universe all objects attract all other objects. Although this Unction decreases with the increase of separation between the bodies but even then tie to this mutual attractions all bodies should have been closer together and finally should have fused together. That means due to the gravitational influence our known erne would not permanently exist. 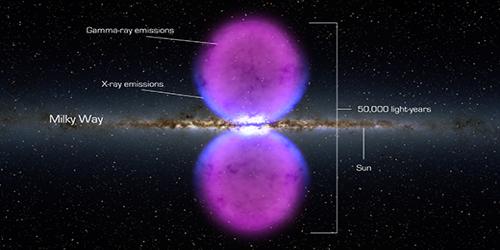 Fig: the newly discovered gamma-ray bubbles extend 50,000 light-years or roughly half of the Milky Way’s diameter.

In 1929 Edwin Hubble proposed that the universe was expanding. Consequently, discussion about the origin of the universe got a new dimension. About 15-20 billion years back the shape of the universe was elliptical. Due to enormous internal pressure and heat, this was exploded with tremendous sound. Because of this big bang, our universe was created. This is the big bang theory. It is thought that time, space, energy and matter have originated from here. Due to big bang different pieces like planets, satellites, stars, Milky Way etc are moving away from one another. At one time by moving and moring away these will reach to the last limit. This means that stars are moving away from one another. Those who far away have the higher velocity to move away.

In 1965 in Bell Telephone Laboratory in America Anno Penzias and Robert Wilson observed while doing experiment with new microwave antenna that a particular type of waves was coming from all around. They realized that this was the result of the Doppler shift of infrared wave to the microwave which occurred due to the big bang. Because of this discovery, they got the Nobel Prize in physics in 1978.

Afterwards, the stars, instead of going far away, will continue to come close to one another and finally will be destroyed and become condensed. This is called big crunch theory. End of big crunch picture is the start of the big bang. In this way, the big bang and big crunch occur successively. It is called pulsar theory.

Scientists have observed by examining through a telescope at a long distance of universe that this universe in plasma state was full of ionized gases. From indirect counting, it has been estimated that within 10-43 sec. the temperature of the universe was 1032 degree Celsius and density was 1010 times the density of water. Within one-hundredth of a second, the universe was full of radiation, neutrino and electron-positron pairs. Even at that time temperature was sufficient to create such pairs of light particles and antiparticles. After two seconds the universe became so cold that electron-positron pairs were not possible to be created and hi by continuously destroying themselves these were transformed into energy. Only a few electrons were left to balance the charge of protons. Now radiation prevailed all over the world and from proton, neutron or electron millions of light particles were produced.

That means, then photons existed in the universe. Afterwards with the passage of time temperature of the universe continued to decrease and the number of high energy photons started decreasing. So, the rate at which the number of photons that were generated by the combination of electron-positron, with equal rate electron-positron pairs was not generated from photons. Within three minutes of the big bang by the combination of proton and neutron helium nuclei started generating. Furthermore, it is seen that after one million years radiation from the extremely condensed matters of the universe and particles lumps releasing heat temperature came down to 3000°C. After coming to this temperature electrons moving around the nucleus in fixed orbit started creating hydrogen and helium atoms. This time the atmosphere and radiation attained a balance and formed a uniform temperature.

Expansion of the universe and the observed ratio of hydrogen and helium in the universe was 3:1. After 5 to 7 hundred thousand years of the creation of the universe, the temperature came down to such a low value that electron started coming to the orbits and completed the formation total atom. As electrons were used in the formation of atoms so a deficiency of free electrons was evident. For this interaction, photons and electrons shifted and became transparent. Before this, the universe was full of plasma, which looked like the colour spectra of the sun. This expansion of the universe can be compared with that of a balloon. Suppose some colour spots are there on the surface of the balloon. Now if the balloon is blown, then the distance between the spots will increase. The distance between galaxies moving with tremendous speed in the universe is increasing. Again, sometimes it is seen that two galaxies moving with tremendous speed are colliding with each other and getting destroyed by releasing enormous heat and light. The kingdom of stars or planets created from clouds of gases and dust and later on transformed into the solar world. And radio wave emitting from that hell of destruction are interrupted by a radio telescope in the earth.

Astrophysicists of today have extended their vision far away by the help of telescopes compared to the first observation of Hubble. Considering the first journey of the galaxies they have calculated the age of the universe as 15 billion years. Again, from the life of radioactive heavy atoms inside the supernova the age of the supernova agrees quite well in the age of the universe. When large stars after exhaustion of the nuclear fuel will contract and due to gravitational attraction and tremendous pressure will produce nuclear heat energy at a severe rate and will explode with millions of illuminating stars then supernova is produced. In 1921, spectroscopy was attached with a telescope. With the help of it, scientist Edwin Hubble analyzed the light rays coming from the stars in the galaxies. It was observed that all galaxies were moving away from the milky way.

Since the big explosion, with the passage of time expansions of the universe, have been continuing at the same rate. But this expansion is not applicable for nearby galaxies. That means, the solar world is neither expanding nor distance between the planets and the earth is increasing. Actually, our milky way and Andromeda and some other small galaxies together have made a local galaxy array.

This galaxy array is a unit system mutually bounded by gravitational attraction. The influence of expansion starts outside this array. Most of the galaxies of this universe are within such small and large arrays. It can be said that even before the big bang if there had an existence of any oscillating world, there is no way to know it. So. we do not have any choice other than to accept that 15 billion years back all these matters and particles were originated. Physicists, Steven Hawking in his book ‘A brief history time’ put forward his justification and explanation in favour of this ‘big bang’ theory.