Home Physics Gas Tube Method for the Production of X-rays 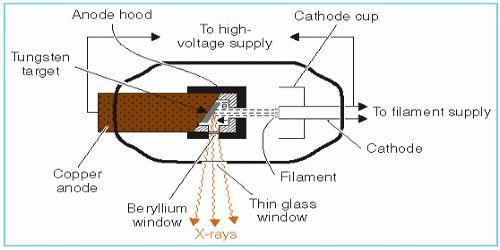 X-rays or Röntgen rays are the revolutionary discovery of the nineteenth century. In 1985, famous German scientist Prof. W.K. Röntgen discovered these rays. We know that cathode rays are nothing but electrons having very high velocity. These high-velocity electrons when suddenly strike a solid metal. X-rays are produced from it. There are three methods for the production of X-rays; viz –

Here discuss only the gas tube method for the production of X-rays.

Gas tube method: the Gas tube is a special type of discharge tube. It consists of an evacuated strong glass bulb. There are three side tubes in this tube. One side tube contains cathode C made of aluminum at concave shape [figure]. Just on the opposite side of the cathode, there exists anode A. Since the cathode is of concave shape, hence cathode rays are concentrated at a point. 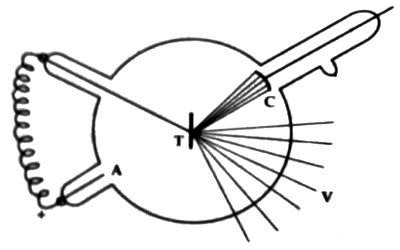 Just in front of the cathode, there is an electrode T. made of high melting point and high atomic weight metal e.g., tungsten, platinum or molybdenum. It a called anti-cathode or target. It remains at an angle of 450 with the axis of the cathode. The anode and the cathode are connected extremely and hence discharge remains constant.

When the pressure inside the tube is between 10-3 mm to 10-4 mm and the potential difference between the anode and cathode is in between 30,000 V to 50.000 V, then electrons from the cathode being accelerated with very high-speed strike the target or object and X-rays are produced from it.

On entering inside an atom of the target, cathode rays drive away one electron from the K or L shells nearer to the nucleus. This vacant space is filled in quickly by an electron coming from the outer shell. Due to this, some energy is emitted as X-ray.