Chromoplast are variously coloured, other than green, mostly yellow and red in colour. They are also variable in shape. Chromoplast occurred in coloured part of plants. e.g. petals, coloured fruit and seeds, roots of carrot etc.

Function: Flowers are coloured and beautiful due to their presence.

Chloroplast: They possesses green pigments named chlorophyll in excess as a result they are green. Other pigments are also present to some extent. Every cell may contain one or more chloroplast. In higher plants the shapes of chloroplast is lenceolate. In Algal cells their shapes are of various types, e.g. cup shaped, spiral, reticulate, star shaped. semicircular etc. 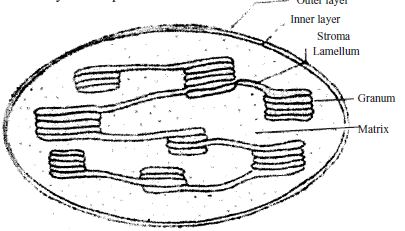 Fig:- Different Parts of Chloroplast (Seen under Electron Microscope and then simplified)

Function: Its function is to prepare carbohydrate food by the process photosynthesis.