Home Biology What is Centrosome?

In animal cell there is a spherical body outside the nucleus, which is called centrosome. The fluid by which it is composed is called centrosphere. At the center of centrosphere there are two cylindrical objects called centriole. At the time of cell division the pair of centriole is separated and moves to two opposite pole (of the cell). They are only found inside of eukaryotic cells, or those cells with a nucleus and membrane-bound organelles. Centrosomes are comprised of two centrioles that are essentially just rings of microtubules.

The purpose of the centrosome is to help organize microtubules (hollow tubes of protein, similar looking to microscopic hollow spaghetti) to be utilized during cell division. It also works to use the microtubules to create part of the cytoskeleton of the cell. This helps give the cell its structure. In a sense, the centrosome helps to stabilize the structure of the cell. While these might seem like simplistic tasks, they are extremely important and critical roles. 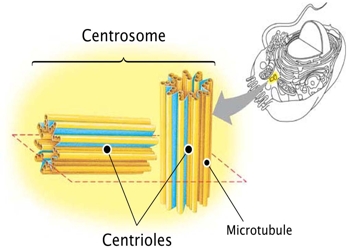 Function: At the time of cell division centrosome directs the poles of spindle apparatus and help in cell division.

Characteristics of Life or Living Things

Importance of Biology in Economic and Environmental Growth