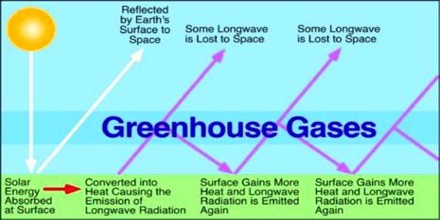 Green house effect: The process by which the temperature of the atmosphere is increased by the green house gases, as known as green house effect. The atmosphere getting heated due to green house gases. Due to this, the ice of Icelands, in a short time will start melting rapidly, which will raise the water level up to 1 to 2 meters. As a result of this rising of sea water level vast area of Bangladesh including Maldives can go under water and millions of people will lost their shelters.

The exchange of incoming and outgoing radiation that warms the Earth is often referred to as the greenhouse effect because a greenhouse works in much the same way. Incoming UV radiation easily passes through the glass walls of a greenhouse and is absorbed by the plants and hard surfaces inside.