Golgi bodies may be flat, spherical or elongated. Normally they are present near the nucleus. It was first observed by a scientist named Golgi in 1898 AD in the nerve cells of owl and cat. This organelle is afterward named Golgi apparatus after his name. In plant cells, their number is small for which it is not always visible under the microscope.

Structure: Golgi apparatus is tubular, small vesicle, vacuolar, elongated vessel like or lamillar bodies. They are vacuolar space bounded by the double-layered membrane. The Golgi apparatus or Golgi complex is found in most cells. It is another packaging organelle like the endoplasmic reticulum (ER). It was named after Camillo Golgi, an Italian biologist. It is pronounced GOL-JI in the same way you would say squee-gie, as soft a “G” sound. While layers of membranes may look like the rough ER, they have a very different function. 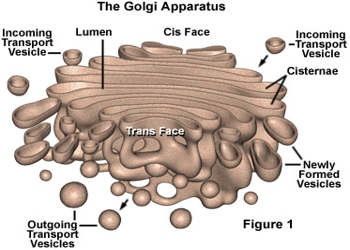 Function: Function of Golgi bodies are- the synthesis of lysosome and non-protein substances, releasing some enzymes, expelling cell water and attaching substances to its membrane produced by endoplasmic reticulum.

What is Pollution? Describe the Harmful Effects of Air Pollution.