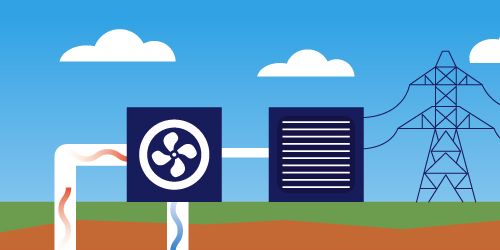 The earth’s internal heat is the heat energy produced from radioactive decay and the constant heat loss from the earth’s structure. Temperatures at the core-mantle boundary can reach above 4000 ° C (7,200 ° F). This original renewable source meets the demand for electricity in countries such as Iceland, El Salvador, New Zealand, Kenya, and the Philippines, and more than 90% of the heat demand in Iceland. Due to the high temperature and pressure inside the earth, some rocks melt and the mantle can behave plasticly as a result of which some parts of the mantle become upward because it is lighter than the surrounding rocks. The rock and water crust is heated, sometimes up to 370 ° C (700 (F)). The main advantages are that it does not depend on weather conditions and has a high potential; For this reason, geothermal power plants are able to provide support services for baseload power supply as well as short and long term flexibility in some cases. If developed irresponsibly, the ground temperature below the surface may decrease. Geothermal is an environmentally friendly technology because it produces little in the way of greenhouse gas emissions.

Geological technology can only be used in certain geologically conditioned locations. With water from warm springs, geothermal energy has been used for bathing since Paleolithic times and for heating space since ancient Roman times, but it is now better known for generating electricity. Worldwide, 11,700 megawatts (MW) of geothermal electricity was found in 2013. In contrast, the incoming solar radiation striking delivers 342 watts per square meter per year to the Earth’s surface (see Solar Power). Geothermal heat energy can be recovered and absorbed for human use and it is found anywhere on the surface of the earth. Recent technological advances have dramatically expanded the range and size of sustainable resources, especially in the case of applications such as home heating, opening up the possibility of widespread exploitation. Geothermal wells release greenhouse gases trapped deep in the earth, but this emission energy is much less per unit than that of fossil fuels. Although geothermal energy is currently a small part of the world’s energy supply mix, it holds great potential for future development because it is a reliable source of power generation that can serve base-load power needs.

The earth’s geological resources are theoretically sufficient to supply humanity with energy, but only a very small fraction can be exploited profitably. Simply put, it is costly to perform seismic sensing, test drilling, confirmation testing, and other necessary preliminary investigations to ensure that geothermal plants will be able to meet the desired product specifications.

What is Pollution? Describe the Harmful Effects of Air Pollution.