Germination of spore and formation of gametophytic plant:

(i) The spore germinates in favourable conditions.

(ii) At the beginning of germination the exine of spore bursts out and the intine expands. 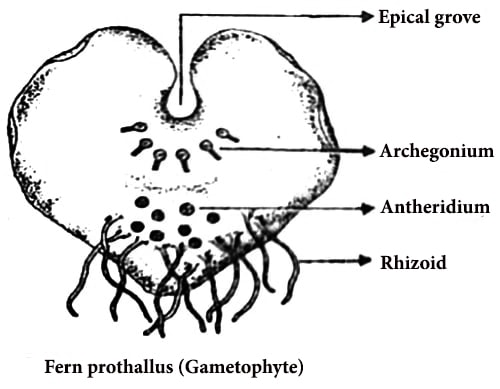 (iii) The margin of it is one layered.

(iv) There is a grove at the widened part.

(v) At the posterior end, there are rhizoids which fix up the gametophytic plant with the soil and absorb water.

(vi) There are two reproductive organs in the prothallus which are:

i) It is situated at the lower end of the grove

ii) They are flask shaped and each archegoniurn comprises of water and neck.

iii) Only one ovum (n) is produced from each archegonium

i) They are situated among the rhizoids at the lower end of the prothallus.

Identifying Characteristics of the Family Leguminosae