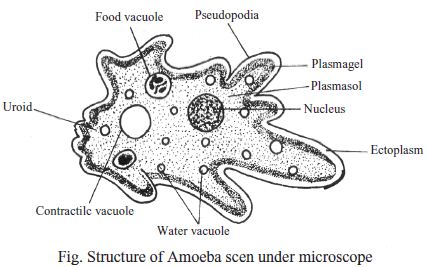 Amoeba appears as a colorless and transparent drop of jelly when viewed under a microscope. It is a microscopic living organism that consists of a single cell. It lacks a definite body shape because it changes its shape by producing the pseudopodia every moment. So, it is not possible to describe its definite shape, anterior or posterior ends, dorsal and ventral surfaces. Like all cells, it has cytoplasm, nucleus, cell membrane and a variety of inclusions in the cytoplasm. Moreover, as Amoeba’s shape is changeable, its body cannot be divided into two similar parts. This condition is called asymmetry.

In size, a full-grown Amoeba generally may be from 1/20 mm to. 1 mm. Although it is just a single cell, it exhibits all the essential functions of any living organism. It inhabits the mud at the bottom of freshwater ponds. The body of Amoeba can be divided into two main parts, Plasmalema and Protoplasm.

(A) Plasmalema or Plasma membrane: The body of Amoeba is covered with plasmalemma formed by the combination of protein and lipid. This membrane is extremely thin, living, semi-permeable and elastic.

(B) Protoplasm: The thick jelly-like substance surrounded by the plasmalemma is the protoplasm. It can be divided into two parts, Cytoplasm, and Nucleus.

i. Cytoplasm: Without the nucleus, the rest of the protoplasm is cytoplasm. It is divisible into two parts, such as Ectoplasm and Endoplasm.

Ectoplasm: The part of the cytoplasm immediately behind the plasma membrane is known as ectoplasm. This part is thick, transparent, non-granular and contractile.

ii. Endoplasm: The granular portion of the cytoplasm which is surrounded by the ectoplasm is known as the endoplasm. This part is semi-transparent and less viscous. The relatively thick outer part of the endoplasm is called plasma gel and inner liquid part plasmasol. The granules of plasma gel generally always remain stable. But the granules present in plasmasol show active movement. The difference between plasma gel and plasmasol is .not consistent because one can be transformed into another.

Nucleus: In the middle of the endoplasm the translucent round body seen is the nucleus. There is only one nucleus in Amoeba. The nucleus is covered by the nuclear membrane made of protein and lipid. Inside there remain chromatin fibers and the nucleolus.