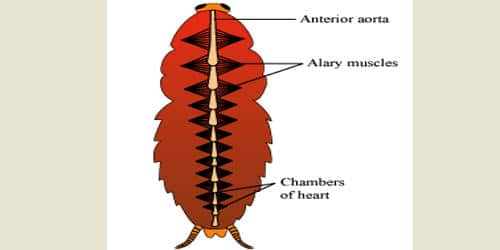 A cockroach is being an insect posse an open circulatory system. They are equipped with an open type circulatory system. Blood vascular system of cockroach is an open type (Figure). Blood vessels are poorly developed and open into space (haemocoel). In this, blood is pumped by the heart and flows open in the body cavity. Organs floating in the blood get nutrition directly. Visceral organs located in the haemocoel are bathed in blood (haemolymph). The haemolymph is composed of colourless plasma and haemocytes. The supply of oxygen is independent through a separate closed type respiratory system.

Cockroaches do not have red blood because they do not use hemoglobin to carry oxygen. They do not carry oxygen in their blood stream either. Most cockroach’s blood is colorless. 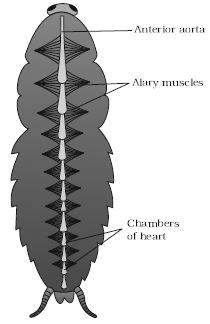 Heart of cockroaches is a pulsatile, 13-chambered structure. Heart of cockroach consists of elongated muscular tube lying along the mid-dorsal line of thorax and abdomen. It is present below the tergal plates and formally in the thorax and abdomen. Its inhalent openings are called ostia, which are guarded by valves. It is differentiated into funnel-shaped chambers with ostia on either side. Blood from sinuses enter the heart through ostia and is pumped anteriorly to sinuses again.

To make it more explicit, the circulatory system of cockroaches is primitive consisting of only heart and primary artery. On the dorsal side of the heart, two nerve chain is present. They work as a pacemaker and start a heartbeat. Such a heartbeat is called a neurogenic heart. The hemolymph consisting of a clear colorless plasma rich in amino acids, uric acid, and numerous different cell types called hemocytes. Contrary to higher animals the oxygen supply is not dependent on the circulatory system. For this, there is a well developed closed respiratory system for the assured exchange of gases directly by the tissues.