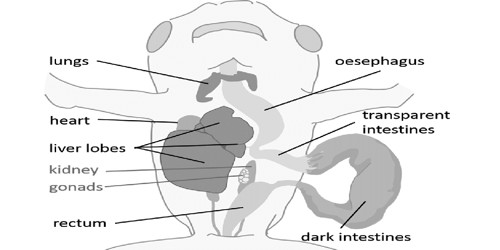 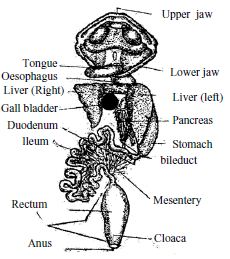 Fig: the Digestive system of Toad

In other words, the system by which food is ingested, digested, absorbed and the undigested portion is ejaculated from the body as faeces are called the digestive system. The digestive system of the toad can be divided into two parts such as the Alimentary canal and Digestive Glands.

In brief – Digestive System of Toad:

(1) Alimentary Canal: Alimentar Canal of a toad is tube-like and extended from the mouth to the anus. It consists of the following organs. e.g.

Mouth: The mouth and the buccal cavity are more or less wide and covered by toothless jaws. The upper jaw is fixed.

Buccal Cavity: It is situated just behind the mouth opening.

Pharynx: It is the last part of the buccal cavity.

Oesophagus: In the lower part of pharynx there is a narrow tube known as oesophagus.

Stomach: It is sac-like and fleshy, wider anteriorly and narrower posteriorly. This end is connected with the small intestine.

Small Intestine: It has two portions, namely: a. Duodenum b. Ileum.

Large Intestine: The wider part is the rectum and the narrower part is cloaca.

Cloacal Opening: It is at the terminal end of the digestive system through which faeces and urine are eliminated to the exterior.

Rectum: The small intestine continues posteriorly as a wide tube, the rectum or large intestine.

Liver: It is the largest gland in the body of a toad. It is divided into two portions. On either side of the heart, the liver is situated. At the mid-region of the liver, the gall-bladder is located.

Pancreas: Pancreas is a very important digestive gland of the vertebrate animals. This gland is situated in between the stomach and duodenum. It looks like a leaf and is light yellow in color.