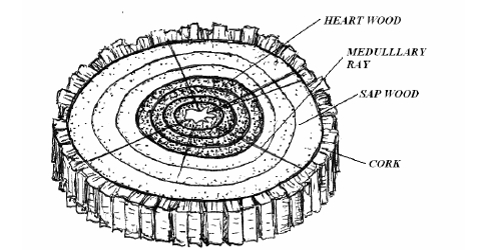 Secondary medullary rays are vertical plates of parenchyma cells running radially through the cylinder of vascular tissue in the stems and roots of plants. The extensions of the medulla, between the vascular bundles, are called Medullary rays. Medullary rays store and transport food materials. They are multiseriate and take part in the lateral conduction of water. These are found in dicot stems only. 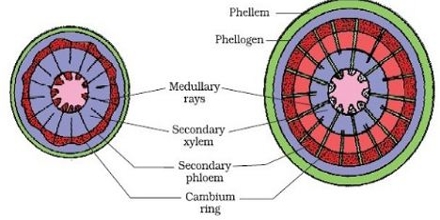 (ii) Secondary medullary rays are formed from the cambium ring. They are formed by the activity of fascicular cambium. They serve as a link between the pith and cortex. They are also known as pith rays and vascular rays.

(iii) During the process of the division of cambium, the cambium cuts out cells on both the outer and inner sides. They are any of the vertical plates of parenchyma cells running radially through the cylinder of vascular tissue in the stems and roots of plants.

(iv) The cells of some particular places of a cambium ring produce parenchyma tissue instead of xylem or phloem. They are produced by the vascular cambium and terminate in xylem and phloem tissues.

(vi) These narrow bands of parenchyma tissues are known as secondary medullae rays. Each may be one too many cells in width.

Secondary medullary rays may be differentiated into xylem medullary rays and phloem medullary rays. Primary medullary rays occur in young plants and in those not showing secondary thickening; they pass from the cortex through to the pith. These medullary or pith rays are essential for the radial conduction of the water, minerals and other organic substances. They transport the substances from the center to the periphery. They perform various functions like food storage, storage of tannins, transport of food and water, gaseous exchange, etc.