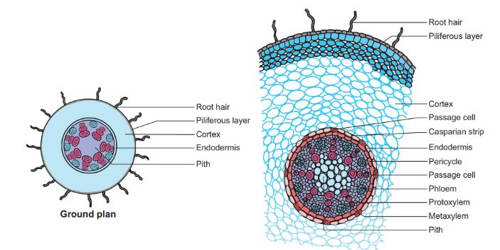 Difference between endodermis and pericycle

Endodermis – The endodermis is the innermost cortical cell layer. Therefore, it is the boundary of cortex and it separates cortex from the stele. It refers to the inner cell layer of the cortex of plants, which surrounds the vascular bundle.

Pericycle – The pericycle is a cylinder of parenchyma or sclerenchyma cells located just inside the endodermis. It is also the outermost cell layer that demarcates the stele of plants. It refers to the outermost layer of a plant, which is replaced by the periderm during the secondary growth in the stem and the root.

Epidermal Out Growth of Plants