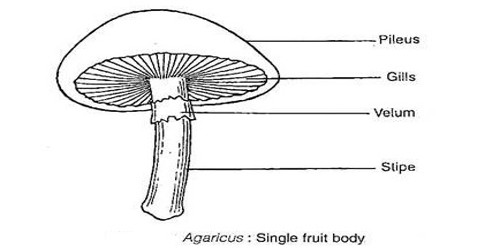 Systematic position in plant classification: Agaricus is a fungus of the phylum-Basidiomycota under the class- Basidiomycetes. It is commonly known as mushroom.

(i) Grows as a saprophyte in decaying organic substances, such as cow dung, crop field, tree trunk, a heap of hays, etc. It is a saprophytic fungus found growing on soil humus, decaying litter on forest floors, in the fields and lawns, wood logs and manure piles.

(ii) Few species of Agaricus can also live in other organisms as parasites.

(iii) It grows best in moist and shady places and is commonly seen during the rainy season. It is cosmopolitan in distribution.

Structure: A complete Agaricus can be divided into two parts 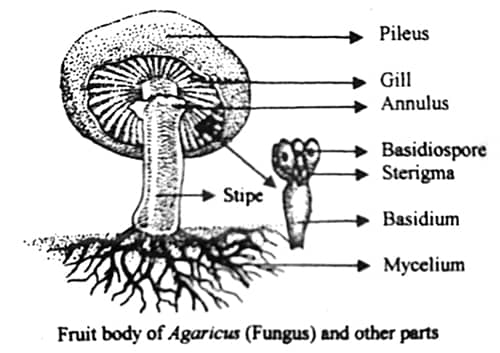 Fruiting body: Fruiting body is related to reproduction and is situated erectly above the soil It consists of an umbrella-like pileus and a stem-like stipe.

There are some membranous substances hanging from the lower part of the pileus, known as Gills and a circular part situated at the tip of the stipe called Annulus.

(a) Vegetative Reproduction: It reproduces vegetatively by its perennating mycelium. The mass of spawn divides artificially into small blocks that are grown in soil supplemented with organic manure to obtain fruit bodies.