Deuteromycetes commonly known as imperfect fungi because only the asexual or vegetative phases of these fungi are known. When the sexual forms of these fungi were discovered they were moved into classes they rightly belong to. It is also possible that the asexual and vegetative stage have been given one name (and placed under deuteromycetes) and the sexual stage another (and placed under another class). Later when the linkages were established, the fungi were correctly identified and moved out of deuteromycetes.

Once perfect (sexual) stages of members of dueteromycetes were discovered they were often moved to ascomycetes and basidiomycetes. The deutemmycetes reproduce only by asexual spores known as conidia. The mycelium is septate and branched. Some members are saprophytes or parasites while a large number of them are decomposers of litter and help in mineral cycling. 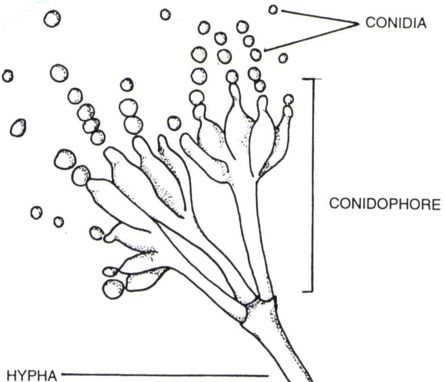 Some examples are Alternaria, Colletotrichum and Trichoderma.