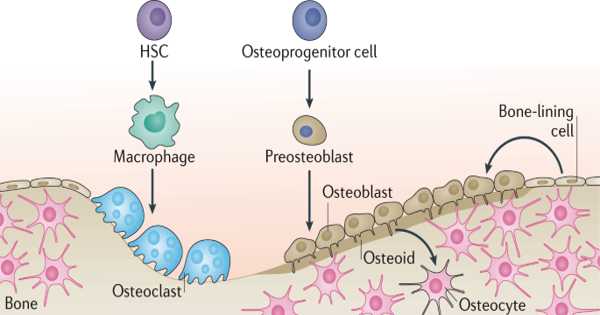 According to the researchers, bone growth in mice follows the same principles as when new cells are constantly produced in blood, skin, and other tissues. This contradicts the previously held belief that bone growth is limited to a finite number of gradually depleted progenitor cells. If the findings are applicable to humans, they could have a significant impact on the treatment of children with growth disorders.

The research group led by Dr. Zhou Bo from the Center for Excellence in Molecular Cell Science, Shanghai Institute of Biochemistry and Cell Biology of the Chinese Academy of Sciences reported the transition of skeletal progenitor during postnatal bone growth in a study published in Cell Stem Cell.

Under physiological conditions, LepR+ BMSCs resided in the perivascular region of the bone marrow, giving rise to osteoblasts and adipocytes, whereas postnatal Acan+ chondrocytes occupied the growth plate, forming osteoblasts and also BMSCs. The functional heterogeneity and hierarchical relationship between these two distinct skeletal progenitors, however, are unknown.

In this study, scientists used lineage tracing tools to map the fate of chondrocytes and LepR+ BMSCs at various stages. They discovered that bone formation was controlled sequentially by perinatal chondrocytes (before adolescence) and adult LepR+ cells (after adolescence).

Furthermore, researchers discovered that conditional knocking out Runx2, the master regulator for osteogenic differentiation, in perinatal chondrocyte and adult LepR+ cells impaired bone growth and thickening, respectively, and that under exercise stimuli, perinatal chondrocyte were more likely to differentiate into osteoblasts than adult LepR+ cells.

This study emphasized the temporally and spatial transition of skeletal progenitors at different stages of bone development, uncovered the hierarchical relationship in distinct skeletal progenitors in development and explained how mammalian limb bones transition from rapid longitudinal growth too much slower appositional maintenance after adolescence from a stem cell perspective.

The researchers discovered that OSTN was highly expressed in bones such as the tibia, radius, and ulna, as well as in the area where the load was applied. Furthermore, they discovered that OSTN was secreted by periosteal osteoblasts in these bones. The periosteum is a membrane found on the outer surface of bones, except at long bone joints, that is involved in bone remodeling and production, particularly during growth.

When the researchers investigated how OSTN achieves this effect, they discovered that it raises levels of another peptide known as C natriuretic peptide, which causes bone-forming osteoblasts to multiply, mature, and become functional.

Because long-term bed rest inhibits bone formation, the findings of this study will be useful in promoting bone maintenance in bedridden patients, as well as in the prevention and treatment of frailty syndrome. Future research will build on these findings to uncover additional mechanisms, such as how periosteal cells detect load stimulation.