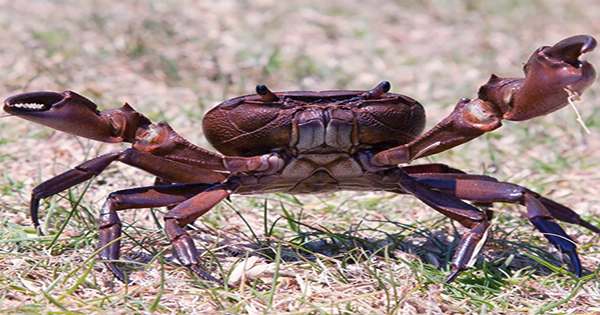 Brown crabs may be mesmerized by underwater power wires, forcing them to loiter around the seafloor for longer than they should, according to a new study. Most alarmingly, electromagnetic fields emitted by the wires appear to cause cellular changes in edible crabs, rendering them more susceptible to diseases and changing their movement patterns. Scientists studied a colony of 60 brown crabs in an aquarium tank at the St Abbs Marine Station in Scotland for the new study, which was published in the Journal of Marine Science and Engineering. They measured how much time the crabs spent resting or moving over a 24-hour period after exposing them to various electromagnetic field strengths.

The crabs were found to show “a clear attraction” to the stronger electromagnetic fields, similar to those emitted by underwater cables. They became significantly less active when near the strong electromagnetic fields as if they were mesmerized and transfixed by its presence. As the researchers explain, this could have a profound effect on the crabs’ migration, foraging, and mating activity.

“Electromagnetic fields are emitted by underwater wires.”The crabs seem to be drawn to it and just stay motionless when it’s at a strength of 500 microTeslas and above, which is roughly 5% of the power of a fridge door magnet,” said Dr Alastair Lyndon, study author from Heriot-Watt University, in a statement emailed to IFLScience. “That isn’t an issue in and of it. But they aren’t searching for food or looking for a partner if they aren’t moving.”

“Male brown crabs move up Scotland’s east coast. They’ll stay put if miles of undersea cabling become too difficult to refuse,” he continued. To delve deeper into the problem, the researchers examined how the crabs’ bodies reacted to the electromagnetic field, which revealed a number of ways in which it may injure the animals.

“We discovered that the amount of blood cells in the crabs’ bodies changed when they were exposed to increasing levels of electromagnetic field strength.” Dr. Kevin Scott of St Abbs Marine Station stated, “This could have a range of effects, such as rendering them more susceptible to bacterial illness.”

Surprisingly little research has been conducted on the impact of underwater cables on marine life. In fact, the majority of the concern has centered on how wildlife might damage the cables, rather than the other way around. Nonetheless, it is obvious that human activity is altering the natural electromagnetic environment, and many marine animals, like sharks and lobsters, are sensitive to electromagnetic fields. As the globe moves toward renewable energy, more offshore wind farms are popping up along the world’s coasts, bringing with them cables that are more underwater. According to the authors of this recent study, this could provide new issues for parts of the world’s marine life.

“Burying the cables in the bottom could be one possibility.”However, this can be costly, it makes maintenance more complex, and in some cases, it’s simply not viable,” Dr. Lyndon explained. “We need to look at more technical solutions so that we don’t have bad environmental consequences while trying to decarbonize our energy supply,” says the author.