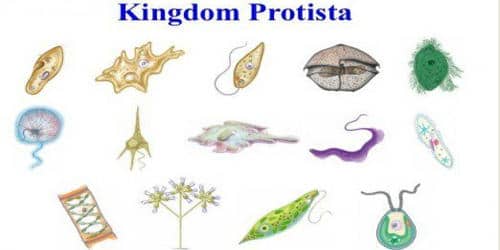 Slime moulds are saprophytic protists. The body moves along decaying twigs and leaves engulfing organic material. Slime moulds expend most of their lives independently, but during food scarcity, they swarm and aggregate into an enormous solitary cell. They are a type of protist that aggregates into colonies and ingest bacteria, fungal spores, and possibly other protists.

Under suitable conditions, they form an aggregation called plasmodium which may grow and spread over several feet. During unfavorable conditions, the plasmodium differentiates and forms fruiting bodies bearing spores at their tips. The spores possess true walls. Once the slime mold cells group, they do one of two things: Either they fuse their individual cells into one massive multi-nucleated cell, or they fuse their membranes to one another to form a cluster of individual cells. They are extremely resistant and survive for many years. even under adverse conditions. The spores are dispersed by air currents. 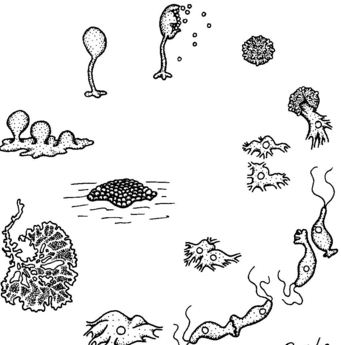 Slime Mould is a bright yellow slimy blob that is commonly seen in the summer on mulched flower beds. The yellow blob turns gray, becomes hard, then breaks down into a brown powder. Their spore-producing structures are not an ugly crust like Physarum, but rather beautiful colored spheres or popsicle shapes. Spores produced in slime molds have cellulose in their cell walls which is not present in Fungal cell walls.

Today, organisms in the Kingdom Protista are defined by:

Slime moulds have unusual morphology. They lack chitin in their cell walls. They are not Fungi. Hence they are placed in Kindom Protista. They have a single yellow blob with many nuclei. This is a characteristic feature of plasmodium (a member of Protozoa). Some stages of their life cycle exhibit Protistan characteristics while some other stages exhibit Fungal characteristics.