Phylum Nematoda are the popular round worms. The body is narrow and pointed at both the ends. There are no body segments. The body is covered by a thin cuticle. The body cavity is considered as a pseudocoelom. The alimentary canal is a straight tube. They reproduce sexually and the sexes are seperate. Nematodes are the most speciose phylum after the arthropods, they occur in nearly every habitat including as parasites in all sorts of plants and animals. There are several free living soil nematodes. Others are parasites. (eg) Ascaris lumbricoides. 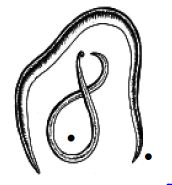