Home Biology Describe the Formation and Structure of a Pollen Grain 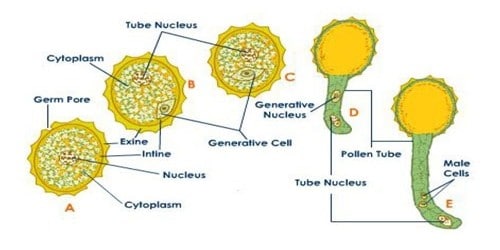 Pollen grains are formed from the anther of a stamen of a flowering plant. There are pollen sacs inside the anther. At the adult stage, pollen mother cells (2n) inside the pollen sacs produce four pollen spores (n) through meiosis from each.

Formation of a pollen spore (n): In coniferous plants, pollen is formed in the microsporangia of the male cone, whereas it is produced in the anthers of flowering plants (also termed angiosperms).

i) Pollen spores are haploid and round in shapes.

ii) It is surrounded by two coverings of which the outer thick covering is called Exine and the inner layer is called Intine.

iii) There is around pore inside the germ pore of the exine.

iv) During this process, the callose is digested by callus and the pollen grains are able to grow and complete the formation of the endospore and exospore. 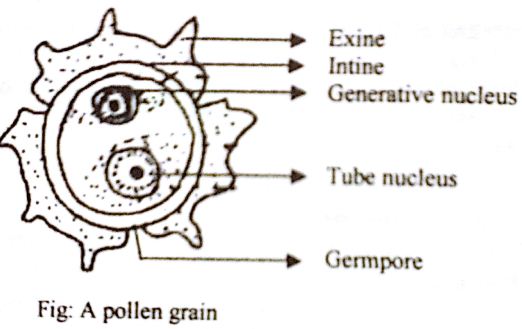 Pollen grains are microscopic structures that vary in size and shape. They vary in size, shape, and surface characteristics depending on the plant species. Some are tiny orbs, while others are egg-shaped.

Viewed through a microscope, a pollen grain hardly looks real. The shape and the external features of the exospore are extremely variable and are often used to differentiate pollen grain produced by different species. An extremely durable body, it has a tough outer coating. The reason for this structure is to guard the male genetic material against the environment (e.g., UV radiation, compression, and water) during transportation from the anther to the stigma. This hardy coat offers great protection from the harsh outdoor environment. The surface of the pollen grain also contains various waxes and proteins which help repel moisture and interact with the stigma, respectively.

This is important because inside this tough shell lie two cells: the tube cell, which will ultimately become the pollen tube, and a generative cell, which contains the male sperm nuclei needed for fertilization.

How does Annual Ring Form?