Home Biology Discuss on the Life Cycle of Yeast

Two particular phases are present in the life cycle of Yeast, such as Haploid(n) and Diploid phase.

i) Two heterothallic (unisexual) vegetative cell or ascospores ( one male and one female) unite together (n4n, fertilization) forming a zygote (2n).

ii) Diploid zygote (2n) then increases its number through budding. But few diploid cells turn into ascus or mother cells

iv) The ascospores, usually come out of the ascus and increase number by budding.

v) They can also take part in sexual reproduction repeating the same process.

Haploid and Diploid phase are flourished equally in the life cycle of Yeast This type of life cycle is known as Haplo-diploblantic life cycle. 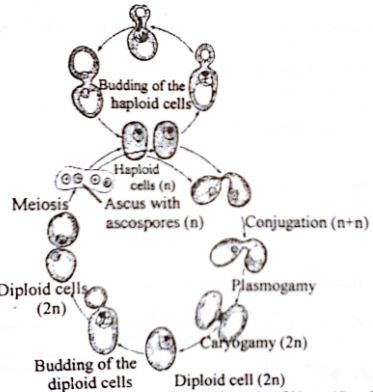