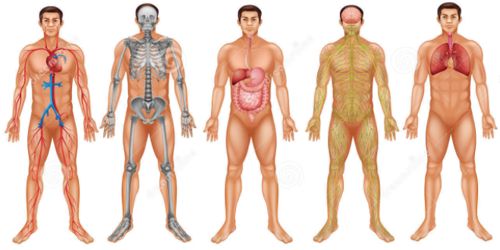 For performing various physiological functions, such as digestion, respiration, excretion, reproduction etc. several organs together form the organ systems in animal body. These are:

Digestive System: This system is associated with ingestion, digestion, absorption of food and removal of undigested residues. Digestive system has two principal parts as: 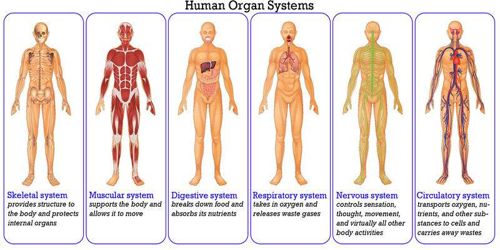 Respiratory System: This system with the help of oxygen taken from the environment produces energy by the oxidation of food present in the body cells to help the body to do every days work. In man the respiratory system .consists of nasal aperture, pharynx, larynx, trachea, bronchus, bronchiole and a pair of lungs made of alveoli.

Nervous System: The purpose of this organism is to obtain external and internal stimuli of the body and to create proper sensation. Nerve system is formed of brain spinal cord and cranial nerves and spinal nerves. Besides, the nerve system has also a part named Autonomous Nervous system. This division of the nerve system controls the involuntary works of the body.

Excretory System: Due to various physiological metabolic activities some waste materials are produced within the body as by products. These materials are usually toxic to the body, so they need to be removed. The procedure of removing unnecessary waste materials from the body is called excretion. The system by which the excretion is performed is called excretory system. The excretory system of human beings consists of a pair of kidney, a pair of ureter, one urinary bladder and one urethra.

Reproductive System: Through this system an animal produces one or more offsprings of its type to maintain the contiriuation of the species. On the maturity, the child becomes capable to reproduce. Man is unisexual. Both males and females have individual reproductive system of their own.

What is Spring Wood or Early Wood