The Nobel Prize in Chemistry 2020 was awarded jointly to Emmanuelle Charpentier and Jennifer A. Doudna “for the development of a method for genome editing. These two scientists won the Nobel Prize in Chemistry for discovering a powerful tool for genome editing that has enabled relatively quick and easy modification of the building blocks of life and promises new drugs for a range of diseases.

They shared the prize awarded by the Royal Swedish Academy of Sciences in Stockholm. Only five other women had ever received the award since its inception in 1901, bringing the total to seven out of 185 individuals. Dr. Doudna is currently a professor of biochemistry, biophysics, and structural biology at Berkeley. Dr. Charpentier, who was at Umea University in Sweden while doing the pivotal research on Crispr-Cas9, is currently the director of the Max Planck Unit for the Science of Pathogens in Berlin. Charpentier, a French microbiologist, and Doudna, an American biochemist, are the first women to jointly win the Nobel Prize in Chemistry, and the sixth and seventh women to win the chemistry prize.

They discovered one of gene technology’s sharpest tools: the CRISPR/Cas9 genetic scissors. With the discovery of the RNA-guided CRISPR-Cas9 system, an easy and effective method for genome engineering has now become a reality. Their genome-editing technology, known as Crispr-Cas9, has swept through the life sciences and pharmaceutical industry. Using these, researchers can change the DNA of animals, plants, and micro-organisms with extremely high precision. The technology consists of two parts. One is a single molecule of RNA that homes in on the genetic target. The other is the Cas9 protein, which snips out the gene. Using these, researchers can change the DNA of animals, plants, and microorganisms with extremely high precision. And it sparked the creation of innumerable startups, which have attracted hundreds of millions of dollars in investment in search of new cancer, hemophilia, and cystic-fibrosis treatments. This technology has had a revolutionary impact on the life sciences, is contributing to new cancer therapies, and may make the dream of curing inherited diseases come true. 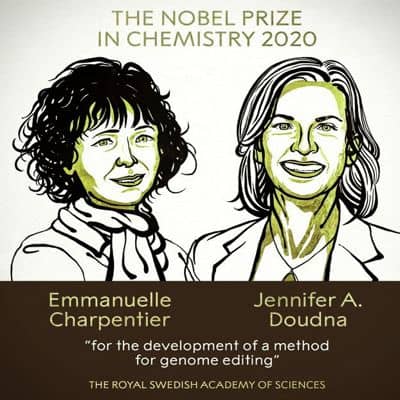 Crispr, which stands for clustered regularly interspaced short palindromic repeats, is the immune system of bacteria. Researchers believe it evolved to help bacteria fight off attacks by viruses. The CRISPR/Cas9 gene-editing tools have revolutionized the molecular life sciences, brought new opportunities for plant breeding, are contributing to innovative cancer therapies, and may make the dream of curing inherited diseases come true, according to a press release from the Nobel committee. Drs. Doudna and Charpentier were investigating the immune system of a bacteria called streptococcus when they realized the power Crispr held to edit genes—and far more easily than other tools researchers had been working on.

There have also been some ethical concerns around the CRISPR technology, however.

It is the first time two women have been jointly awarded the chemistry prize. Charpentier said at a news conference that she hoped the win sent a “positive message to the young girls who would like to follow the path of science and to show them that women in science can also have an impact through the research that they are performing.” Notably, Doudna and Charpentier are just the sixth and seventh women to receive the prestigious Chemistry prize.