Home Biology Describe the Anatomical Structure of a Dicot Leaf 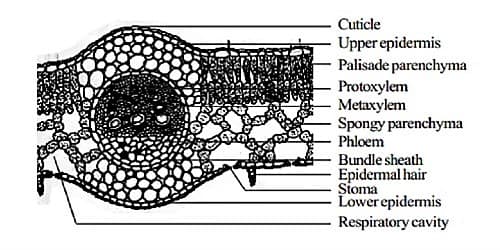 Dicot is a term used to explain a group of flowering plants that have two seed leaves. It generally has secondary growth that shows up like wood and bark in their stems. 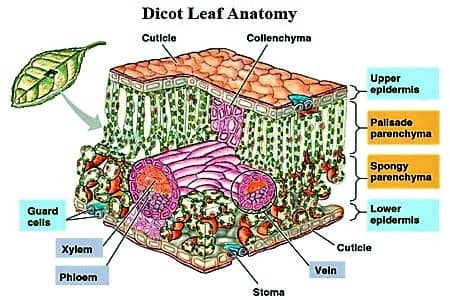 (1) Upper epidermis: It is the outermost layer and secretes a waxy substance called the cuticle. This is a single layer of cells containing few or no chloroplasts. In floating aquatic plants such as Nymphaea, the stomata are present on the upper epidermis. The cuticle helps retain water inside the leaf cells.

Functions: (i) It protects the inner tissues, (ii) Saves the inner use of water.

(2) Mesophyll tissue: Ail the tissues in between upper and lower epidermis except for veins and the branches of veins are called mesophyll tissue. It is the chloroplast containing a portion of the leaf.

It has two types of tissues:

Palisade parenchyma: Below upper epidermis 2-3 rows of long parenchymatous cells are present which is enriched with plenty of chlorophyll. They are mainly responsible for producing food and oxygen for the plant through photosynthesis.

Function: To prepare food, the main function of palisade tissue is to perform the photosynthesis.

Spongy parenchyma: Spongy tissue occupies below the palisade tissue and cells are loosely arranged and irregularly shaped. Cells of spongy tissue are in contact with the atmosphere through the stomata. The cells in this layer contain few chloroplasts and are therefore not generally responsible for photosynthesis.

Functions: The main function of spongy tissue is to perform a gaseous exchange. (Absorption of Carbon Dioxide (CO2) and release of Oxygen (O2) and water vapor) and prepare food.

(3) Vascular bundle: Vascular tissue in the leaves is called vein. The pattern of the vein arrangement is called venation. Dicots have reticulate (net-like) venation.

(4) Lower epidermis: The lower epidermis is similar to the upper epidermis. They usually composed of a single layer of compactly packed parenchymatous cells. They are responsible for the transport of water and food.

Functions: (i) To protect the inner tissues (ii) Takes part in transpiration and gaseous exchange.

Diplotene Stage of Meiosis in Plants