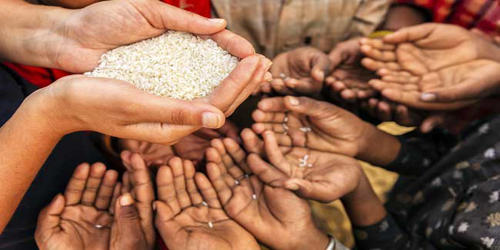 From Malthus’s theory, it is clear that there is an intricate relation between population and food production. The present food problem in Bangladesh and Its relation to population growth only justify his theory.

Causes of food problem: As we have seen above, the increasing population is the major cause of food problems. However, there are a number of other reasons for the food problem in Bangladesh.

Every year Bangladesh is losing about 80 thousand hectors of its cultivable land due to housing, setting up industries, school, college, hospitals, constructing roads and highways, and other infrastructural developments. Statistics show that if this rate goes on, Bangladesh will have no agricultural land after 2080.

Secondly, in this age of tremendous scientific advancement, our agricultural system is still back-dated and unscientific. Though Bangladesh is a land of rivers and wetlands, our agriculture suffers from irrigation and water crisis, because it depends on nature for water. and we could not develop a good system and network of irrigation. Then, our farmers mainly use unscientific and traditional tools and means of cultivation that hampers our food production

Another unnoticed but important cause of food problem is the diversification of our agricultural crops. Previously, rice was the only staple food of Bangladesh. But with the course of time, people’s food habits and demands are changing. Wheat is now another major food grain of Bangladesh. Besides, the line with the demand of local and international markets, farmers now grow various items of crops in large areas of land – maize, vegetables, flowers, fruits, spices, and so on. This is also causing a shortage in the staple food supply.

Impacts of food problem: Any decline or crisis in food-production brings great distress to people, especially poor people, and seriously hampers the economic growth of a country. The obvious result of the food problem is starvation, which in the long run, leads to famine. When there is a crisis or problem in food production, its prices rise. As a result, inflation occurs, which creates socio-economic problems.

Again, in order to meet the demand for food supply, the country has to import food grains from abroad with a heavy cost of foreign exchange. This poses a serious pressure on the country’s economy and other sectors.

Remedies: Food problem is a serious one, and in Bangladesh sustaining food supply to an increasing population is a major challenge. Reasonably, coordinated and pragmatic effort a necessary. Fortunately, Bangladesh has steadily progressed in food production in the last few years. But worrying truth is that Bangladesh is not a food-self-sufficient country and imports a huge amount of food grains every year.

Bangladesh must find ways to increase food production. We should go for hybrid crops from hi-yielding seeds. We have to develop our cultivation system scientifically and ensure irrigation fertilizers and insecticides. We can start at contract-farming. Another important step required is improving our land distribution system, preventing river erosion, and sustaining agricultural production in times of natural disasters.

And finally, the most important step is to control the population explosion. Specialists (Malthus, Recardo) say that in spite of technological advancement and its application in agriculture, there is a limit to food production, above which it will not rise, but population growth will continue. So population growth must be kept minimum.

Conclusion: Recent research reveals that the present world is not a food-surplus one, but a food-deficit one, due to climate change, population increase and decline of cultivable land. However, as there is no alternative to food for our survival, we must solve this problem. Otherwise unprecedented and quite terrible disasters may fall on us. Starvation, malnutrition, poverty, and suffering will prevail frustrating all our development projects and positive achievements.