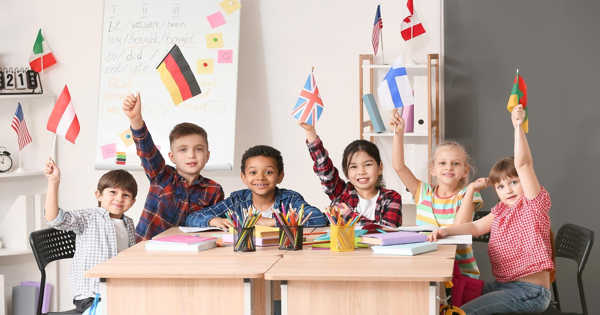 For the first time, a group of researchers devised a method to test how parents use what they know about their children’s language when speaking to them. They discovered that parents have extremely precise models of their children’s language knowledge, which they use to fine-tune the language they use when speaking to them. The findings are available in an advance online publication of Psychological Science.

“We’ve known for years that parents talk to their children differently than they do to other adults in a variety of ways, such as simplifying their speech, reduplicating words, and stretching out vowel sounds,” said Daniel Yurovsky, assistant professor of psychology at Carnegie Mellon University. “This stuff helps young kids get a foothold in language, but we don’t know if parents change the way they talk as their children acquire language, giving children language input that is just right for learning the next thing.”

Adults tend to speak more slowly and at a higher pitch than children. They also employ more exaggerated enunciation, repetition, and a more simplified language structure. Adults also intersperse their communication with questions in order to assess the child’s comprehension. As a child’s language fluency grows, so does the sentence structure and complexity used by adults.

Yurovsky compares this to the steps a student takes when learning math in school. “When you go to school, you start with algebra, then plane geometry, and then calculus,” Yurovsky explained. “People talk to children in the same way without thinking about it. They are keeping track of how much their child knows about language and modifying their speech so that children can understand them.”

Yurovsky and his colleagues wanted to know how caregivers tailor their interactions to their child’s speech development. The team created a game in which parents assisted their children in selecting a specific animal from a set of three, a game that toddlers (aged 15 to 23 months) and their parents play on a regular basis. Half of the animals in the matching game were animals that children typically learn before the age of two (e.g., cat, cow), while the other half were animals that children typically learn later in life (e.g., dog) (e.g. peacock, leopard).

“Parents have an incredibly precise knowledge of their child’s language because they have seen them grow and learn,” Yurovsky explained. “These findings demonstrate that parents use their understanding of their children’s language development to fine-tune the linguistic information they provide.”

The caregiver used a variety of techniques to convey the ‘unknown’ animal to the child, according to the researchers. The most common approach was to use additional descriptors that the child was already familiar with.

“This [research] approach allows us to confirm experimentally ideas that we developed based on observations of how children and parents interact at home,” Yurovsky explained. “We discovered that parents not only used what they already knew about their children’s language knowledge prior to the study but that if they discovered they were wrong — for example, their child didn’t actually know ‘leopard’ — they changed the way they talked about that animal the next time.”

The experiment included 36 trials in which each animal appeared as a target at least twice in the game. The participants had a racial makeup similar to that of the United States (56 percent white, 27 percent Black and 8 percent Hispanic).

The findings reflect a western parenting perspective, as well as caregivers with a higher educational background than is typical for the country. The researchers did not assess the children’s knowledge of each animal independently. The findings of this study are inconclusive as to whether the children learned any new animals while playing the game. Yurovsky believes the findings may be of interest to researchers working in the field of machine learning.

“These findings could aid us in understanding how to think about machine learning language systems,” he said. “We currently train language models by providing them with as much language data as we can get our hands on all at once. But we could do better if we could give them the right data at the right time while keeping it at the right level of complexity for them.”

Ashley Leung from the University of Chicago and Alex Tunkel from The George Washington University School of Medicine and Health Sciences collaborated with Yurovsky on this project. The James S. McDonnell Foundation provided funding for this project.