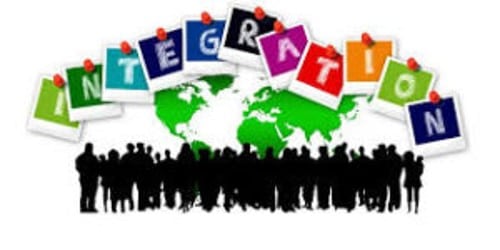 National Integration is a sense of unity among the people of a Nation. It refers to the sense of emotional oneness in a land of people belonging to diverse cultures. It principally aims at providing a better environment for the people of a country. It is a very important factor and can only be achieved if the people of a Country have faith in each other. Today, no country in the world can claim a single communal identity. All the people of a nation are like family members and being unite on any affair gives more strength and ability to dominate the rivals. It provides strength to the people to fight against evil forces.  Different communities live side by side in a state. It will not be wrong to say that National Integration is the primary need of every Nation. Socio-cultural and economic disparities and inequalities tend to reduce in a situation of national unity and solidarity. All of them belong to the same nation and live together in peace and amity. Thus they can develop themselves in all the aspects.

Unity is nothing but accepting and promoting the thoughts and beliefs of every fellow citizen. In fact, unity in diversity is the very strength of her civilization. It expresses itself through the feeling of commonness, oneness, identity, nationalism, loyalty towards the nation. It is very important that we understand the feeling of each other and correct them if we find them wrong instead of criticizing them. It also multiplies the union of brotherhood amongst communities, societies and the people. Religious intolerance disturbs the unity, integrity, and solidarity of any nation. Equality demands equal opportunity for all sections of society and more so for the depressed groups of people.

National integration also helps in keeping the stability of a country and adds up to its whole development. Despite our personal profit, we would have to think about social welfare and the goodwill of others if we want National Integration. It improves the feeling of loyalty and fraternity towards the nation. Besides, removal of poverty and casteism, restoration of moral and political sanity are the need of the hour. National Integration demands to treat every citizen equally and to provide them every right rather than dominating them. It unites the people in case of any national emergency. National integration is a positive notion, and therefore, can accelerate the pace of development and social change.