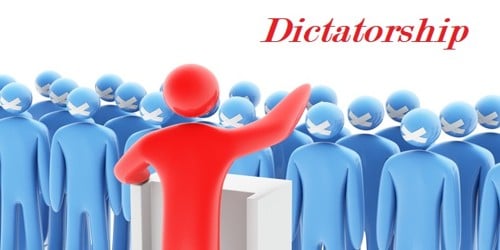 In a dictatorship, absolute power is with the dictator. The Government will have absolute power. It is a situation where a single person or political party rules the entire country. The dictator is the political leader who holds extraordinary power and exercises his power for self-interest. It does not involve any electoral process for the appointment. In a dictatorship, the ruler is the one who acts for the whole Nation. Citizens no longer have the choice to choose who governs them.

The most common feature attributed to dictators is to take advantage of their position, usually by restraining the freedom of speech of the people citizens. The person dominates all the subjects of the country or state which he’s ruling. It is done in order to maintain social and political supremacy. Under this system, the individual is subordinate to the state. People have no right to voice their thoughts on the way they are governed. He is supposed to sacrifice everything for the sake of the state. There are no elections held and people have no right to choose their leaders. No opposition, no disagreement is allowed, if there is any such opposition, it is crushed. In a dictatorship, the law-making body is a single person that is the dictator. The people become sheep-like. They lose interest in life. In such type of government, there is little regard for the rights of people.

Demerits of Dictatorship: In a dictatorship, the majority of power is granted to one individual. The dictator misuses his power at the expense of the citizens. People have no right to interfere in the way they are governed and are unable to involve in the political system. They always oppress and suppress the people. A dictatorship is a dominant form of government. There are no elections and there are human rights issues concerned in this form of government. They cannot tolerate any opposition and impose restrictions on the press, political parties, and adverse propaganda. In a dictatorship, law enforcement and lawmaking can often become forceful and violent. The chief issues in this form of government are propaganda, repression, and media blackouts. It somehow leads to war.

The main defect of Dictatorship is that liberty and rights are curtailed in it. There is no freedom of speech and thought under a dictatorship. People can get into trouble for opposing their government. An individual does not enjoy liberty and right for the development of his personality and is forced to act as governed by his ruler. They believe in victory, war, and violence, with the result that the country is engulfed in war. 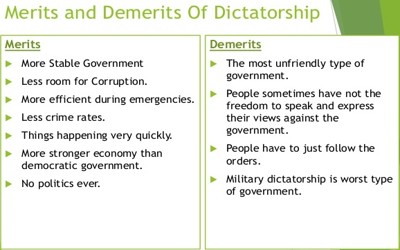 Merits of Dictatorship: A dictator is a leader who is an expert in the field of administration and organization. In a dictatorship, usually, there are very strict rules and punishments for even a small crime or violation of the law. The majority of the population, especially in the developing nations, is ignorant and illiterate and cannot make a correct judgment. Some argue that something as unpredictable and complex as elections can prove to be a disaster. The dictators have access and control over everything right from the economy to the laws and the people. So he has quick decision-making ability that can work in favor of his country and people.

Dictators can bring social reforms and eliminate social evils and crimes through a set of laws and regulations. When a country faces any kind of emergency situation such as a war or a health epidemic, a dictatorship government can prove to be the most efficient one. A dictator, who works for the advancement and betterment of his country proves to be successful and is liked by all. They set their goals in which they have to progress and develop.

Drug Addiction and its Effects