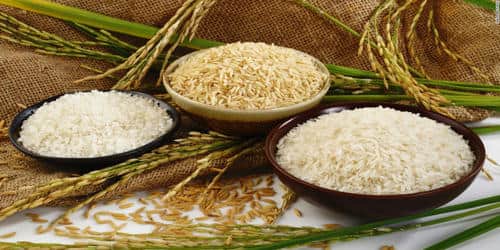 Where grown: Rice is chiefly cultivated in the tropical countries of the world. Heavy rainfall is also necessary for its good growth. It grows to beat on low and moist soil and as such Bangladesh, India, Burma, Thailand, China, Japan, and Indonesia are the major rice-producing countries of the world. Nowadays the United States of America and Russia have also started growing rice well.

How grown: The cultivation of rice is not so easy. First of all, the land is properly tilled, harrowed, and manured. Then the seeds are sown in a small plot of land. In a few days, they germinate. Rice needs lots of water for irrigation. Rice can be grown in different situations in water availability.

Kinds/Varieties of Paddy/ Rice: In Bangladesh, four kinds of paddy are grown now. They are Aush, Amon, Boro, and Irri. Aush grows very early. It is sown in May and reaped in August. Aman is grown in June and reaped in November. Boro is sown in winter and reaped in Spring. Irri is grown throughout the year. Rice is of two kinds-Atop or unboiled and siddha or boiled. The grain is dried in the sun. They are then husked and shifted. Thus, we get atop rice. To get siddha rice, the grains are boiled in water. They are then exposed to the Sun. Next, they are husked by a wooden Dheki. Rice is now prepared in mills also. It also exerts a sparing effect and plays an important role in the functions of intestinal tract.

How prepared for use/ how we get rice: When the paddy ripens, the farmer went into the fields with his sickle. He cuts and binds the crops into bundles. These bundles are taken home and beaten against a plant or trodden upon the exam, in order to separate the grains from the hay. This is called threshing. The grains are paddy from this paddy we get rice.

Uses: Rice is the chief food of the Bengalese. Rice contains Carbohydrates. They are the main source of energy in the food. Starch and sugar provide most of the energy (60% – 80%) to our body. Various kinds of food are prepared with rice. These are fried rice, beaten rice, cakes, etc. Bread is also made from the powdered rice. Sometimes rice is fried in various ways and we get chira, muri, khai, and Moa. Palau, Khichuri, Payesh, etc. are also made of rice. Its straw is also used for various purposes such as fodder of the cattle. The husks of paddy are used as fuel. Poor people make thatched huts with straw. No other is so useful as rice in Bangladesh.

Conclusion: The people of Bangladesh cannot do even a day without rice. But the production of it is not sufficient to meet the heed of our people. So mechanized cultivation of rice must be introduced in our country and other proper measures should be taken to increase the output of rice. So, we should take all possible care for the cultivation of rice.

The necessity of Canal Digging