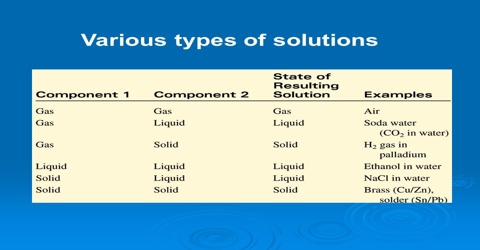 When one substance dissolves in another, particles of the solute — either molecules or ions, depending on the nature of the solute — must be distributed throughout the solvent and, in a sense, solute particles in solution occupy positions that are normally taken by the solvent molecules. In a liquid the molecules are packed together very closely and interact strongly with each other. The ease with which a solute particle may replace a solvent molecule depends on the relative strength of the forces of attraction of solvent molecules for each other, solute particles for each other and the strength of the solute-solvent interaction. For example, in a solution formed between hexane (C6H14) and octane (C8H18) both species are non-polar and have weak London forces among the molecules of each compound. As it happens the strength of the forces of attraction between the pairs of hexane molecules and pairs of octane molecules are of nearly the same magnitude as these between the molecules of the haxane and octane. For this reason the molecules of hexane can replace molecules of octen with ease. As a result these two substances are completely soluble in all proportions. Thin are said to be completely miscible with each other. 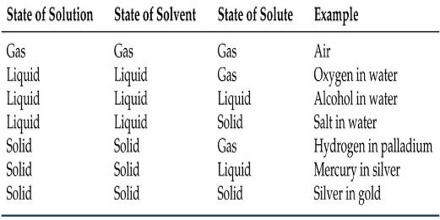 Water (H2O) and ethanol (C2H5OH) are miscible in all proportions. The C2H5OH molecules can form hydrogen bonds with water molecules as well as with its own molecules. Because of this hydrogen bonding ability the solute – solute, solvent – solvent and solute – solvent interactions are not appreciably different from each other in a solution of the two substances. There is no significant difference between the environments of the molecules as they are mixed. So they are completely miscible. However, the number of carbon atoms in the alcohol molecule affects its solubility in water. This is shown in Table. 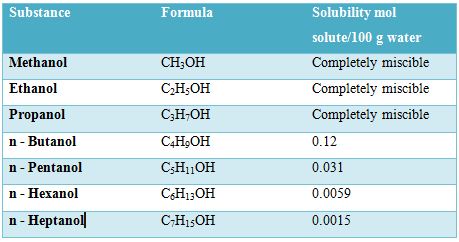 Now let us consider what happens when we try to dissolve water in C8H18. Because octane molecules are non-polar, the forces of attraction that exist between them are relatively weak London forces. In contrast, water is a polar substance and strong hydrogen bond exists between their molecules. Attractive forces between polar water molecules and non-polar octane molecules are much weaker than hydrogen bonds. The H2O – C8H18 interactions are insufficient to overcome the H2O – H2O interactions; consequently the C8H18 molecules cannot penetrate between the water molecules. When the water molecules meet one another they tend to stick together simply because they attract each other more strongly than they do molecules of C8H18. This ‘clumping together’ continues until the two liquids form two distinct layers: one layer consisting of water with a very small amount of octane and the other layer consisting of octane with a very small amount of water. The liquid pairs are said to be immiscible with each other.

Apart from the miscible and immiscible liquid pairs there is a host of other liquid pairs which are partly miscible with each other.

Viscosity and its Importance 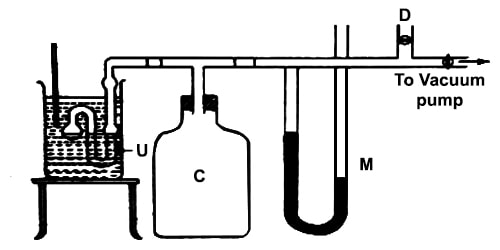 Measurement of Vapour Pressure by Isoteniscope