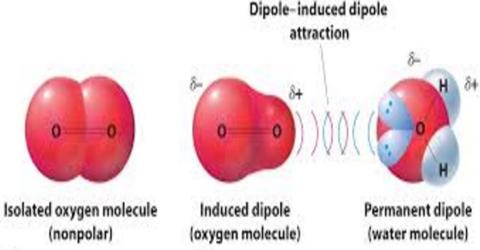 A dipole–induced dipole attraction is a weak attraction that results when a polar molecule induces a dipole in an atom or in a nonpolar molecule by disturbing the arrangement of electrons in the nonpolar species. The above ideas of intermolecular force are unable to explain why molecules which do not have dipoles and noble gases like argon, xenon etc. can be liquefied and solidified. Strong attractive forces must exist between the molecules or atoms (in case of noble gases) to keep the particles together in these states.

Let us take the example of a Xenon atom. The electron distribution about the nucleus of a Xe atom is perfectly spherical. However, the electrons are constantly in motion and it is possible that at any given instant in some of the Xe atoms all the electrons may be positioned on one side of the nucleus, temporarily giving rise to partial positive charge at one end of the atoms and a partially negative charge on the other side. As a result an instantaneous dipole is formed in these Xe atoms. During this transitory existence the instantaneous dipole is likely to induce a dipole in a neighboring atom and the two instantaneous dipoles attract each other. A schematic diagram of this situation is depicted in Figure. 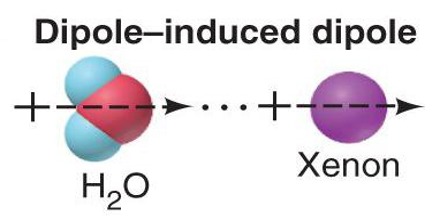 Forces between transitory dipoles are called instantaneous dipole-induced dipole forces, or alternately, London forces or dispersion forces after Fritz London who firs proposed them. We will refer to than as dispersion forces. It should be realized that ii a one gram sample of any substance the number of particles (atoms or molecules) is so large that if a small fraction of such particles are oriented in the manner described the attractive force between the panicles will be significant. It is these forces that are responsible for the liquefaction and/or solidification of substances whose molecules dc not possess permanent dipole moments. For example, dry ice or solid carbon dioxide. The carbon dioxide molecule is linear and has no overall dipole moment. Similarly carbon tetrachloride, with perfectly tetrahedral molecules and no net dipole moment, a liquid at room temperature, and iodine, which consists of iodine molecules, is a solid at room temperature.

What is the Joule Thomson effect?