Home Chemistry What the condition of liquefaction of gases? 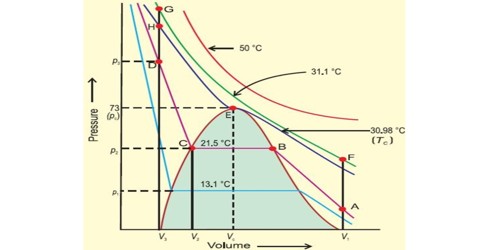 Liquefaction of gases is the procedure by which substances in their gaseous state are converted to the liquid state. Liquefying a gas means the conversion of gas into a liquid.

There are two conditions for the liquefaction of gases. There are-

When pressure on a gas is increased, its molecules nearer together, and its temperature is condensed, which removes sufficient energy to make it transform from the gaseous to the liquid state.

By decreasing temperature: According to the kinetic theory of gases if the temperature is decreased kinetic energy of molecules also decreases and at the same time volume of gas also decreases. The molecules which come close to each other at low temperature cannot resist the intermolecular attraction of each other. Therefore the gas turns into liquid due to this attraction force. For example, Ammonia gas can be liquefied by applying high pressure and lowering temperature.

Causes of liquefaction of gases –

Gases are hard to transport. Due to their physical properties, it is approximately impossible to move them from one place to another. For a similar reason, the gas is malformed into a liquid. The study of liquefaction of gases tells us about changes in the properties and structure of a gas. It also gives important information about the formation of substance in general.

What is liquid crystal?