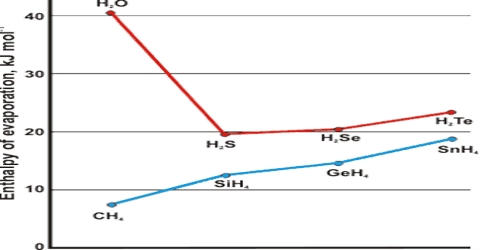 Boiling Point of a Liquid: Enthalpy of Vaporization

The temperature at which the vapour pressure of a liquid equals the atmospheric pressure is called the boiling point of the liquid. Boiling is characterized by the state in which stable bubbles of vapour formed within the body of the liquid rises to the surface and then break. Once boiling of the liquid starts, the temperature of the liquid remains constant at its boiling point, and the liquid continues to change to vapour. If, however, the external pressure is higher than 1.0 atmosphere the boiling point will be higher. In dealing with organic liquids which decompose at the normal boiling point, it is sometimes necessary to boil or distil at a lower temperature. This is accomplished by reducing the external pressure and the process is known as distillation under reduced pressure. The enthalpy of vaporization, (symbol ∆Hvap) also known as the heat of vaporization or heat of evaporation, is the amount of enthalpy or energy that must be added to the liquid substance, to transform a quantity of that substance into a gas. 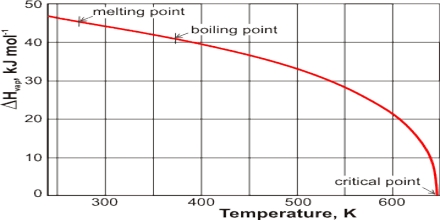 The fact that liquid at its boiling point is converted into vapour continued heating but without increase of temperature indicates that the process of conversion of liquid into vapour is accompanied by absorption of heat. This energy goes to supply the extra energy to the molecules so that they can escape from the sphere of attraction of other molecules and go to the vapour state. The heat absorbed when a definite quality of liquid, e.g., or 1 g or 1 mole, is converted into vapour is known as the Latent Heat of Vaporization. The heat necessary to evaporate 1 mole of liquid is known as the molar heat of vaporization. The latent heat of evaporation of water g-1 is about 2259.4 J while that oil benzene is about 393.30 J.