Home Physics Noise and Musical Sound and their Effect 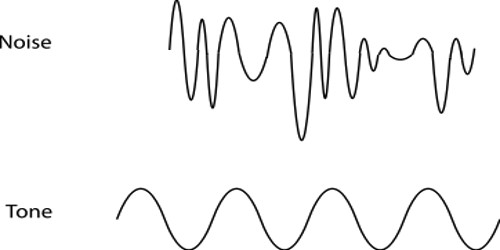 We hear different sounds around us. For examples, the pattering sound of rainfall, tone of violin, note of guitar etc. are pleasant and we enjoy to listen to these. On the other hand, screaming, noisy uproar, loud sounds, sound of a horn etc give us pain. We can classify these sounds into two categories— musical sound and noise. Those sounds which are pleasant are called musical sound and the sounds that are unpleasant and give pain in the ears are called noise.

This distinction has been made on the basis of sensation. But this distinction based on sensation is not scientific. For this reason the distinction is also made on the basis of physical properties. The sound which is pleasant or musical to a person may not be so to another person. It depends on the mentality or temperament of the listener, on the environment etc. Due to the combined effects of these a musical sound may appear to be noisy, on the other hand a noisy sound may appear to be musical. In other words we cannot make a clear demarcation of musical sound and noise. Distinction of these two sounds may be made on the basis of relative choice. For example, Tagores songs may be pleasant to a person but not the band music and to another person reverse may be true.

Sound that is produced due to the regular vibration or periodic vibration which is pleasant to us is called musical sound. On the other hand, if the vibration of sound source is irregular or non-periodic which becomes unpleasant to us is called noise. So it is seen that that musical quality exists in the sound originated from Harmonium, guitar, setar, piano, flutes, on the other hand, sound generated from cracker, noise of a market, sound of a penetrating nail by a hammer produces noise. It can be said that on the number of overtones and also on their amplitudes, quality of sound is dependent. In noise relative magnitude of these quantities cannot be put in arithmetic rule.

Noise is a non-musical sound, but sometimes from a long distance it may sound murmuring but pleasant to hear, rather not unpleasant. Again, noise also remains mixed with musical sound. For example, sound produced by a hammer striking a bell contains both noise and music. Distinction of musical sound and noise is a relative matter that depends on a person who hears it. In particular situation same sound may be musical or noisy to the same person.