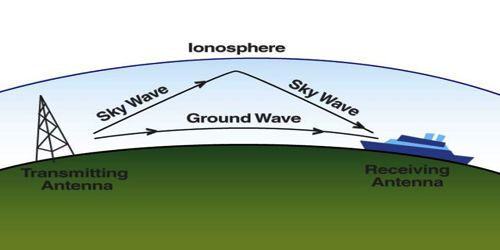 If a stone is thrown in a clam water of a pond, the point where the stone strikes first water surface vibration is generated there. This vibration being transferred from one particle to another particle spread, all over the pond. Due to this vibration, no water particle does move away from its equilibrium position. Only centering on this equilibrium position particles of water oscillates up and down in simple harmonic motion and each particle transfers energy to its neighboring particle. But at a particular moment water particles stay at different height and position and look like a surge. This surge is wave. You must have noticed that when gentle breeze blows over a paddy field, surge is produced due to the periodic vibration of the paddy leaves. Again, if a leaf or a piece of paper is observed in water it a seen that waves are travelling one after another but this leaf or piece of paper instead of moving away with waves oscillates up and down at the same place. From this event it is understood that the point on the water surface where the stone strikes, there produces disturbance in the water particles and particles oscillate up and down. Due to the cohesion between water particles this motion is communicated to the neighboring particles. As a result, these particles also continue oscillating in the same manner. These particles again make the neighboring particles oscillate. In this way, whenever there is disturbance on the surface of water it continuous to propagate through the surface of water. This is called wave. Here only character of disturbance propagates as waves, water particles only oscillate up and down at the same place, but they do not move along with the waves. From the motion of a floating leaf or piece of paper in water it is quite evident. Again, as wave propagates particles in the calm water continue to oscillate that means, the wave transfer some amount of energy to every water particle. So, it can be said that the stone gives energy to the water particles where it strikes the water surface. This energy spreads from one place to another place as wave.

Progressive Wave Explanation in terms of Wave and Sound