We know that the sound is a power. This power is circulated through the wave. The sound wave is a longitudinal wave. During the circulation of this wave, the detraction and expansion of the substance are created (Fig 1).This sound wave makes a sense of hearing in our ear by being circulated from the medium.

It is noticeable that the sound is not created without vibration. When tune-pin copper, bowl, the bell of school is ringing, you will understand that they are vibrating if you touch them. When you speak, you will see that your throat is vibrating. 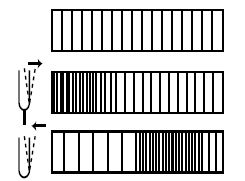 As long as the bowl produces sound it continues its vibration. So, cniall waves are produced in water. While the vibration of the bowl stops, the sound stops, so does the wave. So it is understood that a vibrating object can produce sound. But it does not mean that any vibration of any object can produce audible sound. For an audible sound, there must have a material medium between the source of the sound and the listener, and the frequency will be in between 20 Hz to 20000 Hz.

Characteristics of the sound wave:

The vibration of objects produces sound wave and an elastic material medium is needed for its propagation. So, the sound is called a mechanical wave. Since the direction of propagation of wave and of particles are in the same direction, so is longitudinal.

So higher the amplitude, the higher is the intensity. Reflection, refraction and superposition are possible in case of the sound wave. The velocity of the sound wave depends on the temperature and the humidity of medium too.