Home Physics What is called capillarity?

Capillarity means-
The interaction between contacting surfaces of a liquid and a solid that distorts the liquid surface from a planar shape. Also called capillary action.

Example, When a capillary tube of fine bore is dipped in water, water rises in the tube.

On the other hand if the tube is dipped in mercury, there is depression of mercury level in the tube, showing in figure. 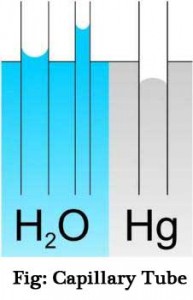 This property of rise or depression of a liquid inside a capillary tube is called capillarity.

The phenomenon, resulting from surface tension, in which liquids rise up capillary tubes and which also causes them to form a concave or convex meniscus at their surface where it contacts a solid. It is one of the most important effects of surface tension.

What is viscosity of a fluid or liquid?